Too Close for Comfort.

It was only a matter of time, I suppose. If you do certain activities in certain ways you increase your risk of an incident. What I am talking about is getting doored. I ride a bike everyday no matter what the weather and on sometimes narrow busy streets, and sometimes with a fully loaded cargo bike (thankfully it wasn't loaded tonight). People get doored everyday around the world; tonight was my turn. Some get seriously injured or killed; I was lucky that I'm only a little scraped/bruised. Here's a brief story of how it happened; I didn't actually hit the door head on, but nonetheless it was just as life threatening. I was riding down Elmwood Avenue, which is a narrow and often busy street. It is so narrow that I have to ride directly next to the cars to stay out of traffic. I usually look a few cars ahead to see if I see any movement in them (as if someone is about to get out). But it was at night, I has cold, and I was tired; in short I was in a sort of daze and just wanting to get home. Anyhow, as I pass a car I hear the familiar "click" sound of the door being disengaged. This next part happened so quickly it was as if I was seeing it in slow motion, like I was viewing a film frame-by-frame. Surreal. The door didn't fully open until I was next to the car and I swerved (into traffic) to avoid it. I yelled something, I'm not sure what, probably more of a sound than a word...whaaa! And as I passed I didn't hit the door but caught it. One of the support bars or part of the rear undercarriage of the Mundo caught and hooked on the door as it opened. The word "hooked" is very pertinent. Because when the bike hooked onto the door it came to an immediate, abrupt, and complete stop...but I did not. Thankfully I was cold and tired and not going very fast, maybe 10mph, but it was fast enough. I'm not sure if I went straight over the handlebars or left the bike from the side, but I do know that I became separated from the bike and for a split second or two was air-born. When I hit I landed on my side and nearly in the middle of the street, rolling like an actor in a b-rate movie. But this is the part that is truly scary/upsetting to me. When I flew into the street I knew that there were other cars behind me. And as I landed and rolled a car's tire passed me by mere inches. A man and woman who were walking by came to my aid, but surprisingly I was not really hurt. Meanwhile the bike was laying next to the car about 5 paces behind me. The woman got out and initially apologized and said that she didn't see me (I have front and rear lights, by the way). But the people who helped me seemed more concerned than her. I told them and the driver not to worry and that I was okay (but I was and still am shaken), and I mentioned to her that this street is a thoroughfare for bikes and she should look before she opens her door. She again told me she did, and then pointed to a long strip of metal from her door laying on the ground (likely what the bike caught on) and said "Now look, you broke my door." But I could have been killed, I told her, and I nearly was. "But you broke my door," she said again. And those were our parting words. I thanked the man for helping me, and again assured him that I was all right. I straightened the front rack and handlebars a bit, hopped on the bike and pedaled home. Thanking God the entire way that I was not just killed or seriously injured. But this is how it happens I suppose...you don't know it's coming. Just going about your business and a freak accident can change your life forever, or end it. On my way home I thought of the series of events that had to happen today in both my and the driver's lives (and in the person in the car who's tires passed me) in order for us all to be in that same exact spot at that same exact time. But then I had to stop thinking about it because it started to freak me out...one second in time or a few inches in either direction and the outcome may have been entirely different. 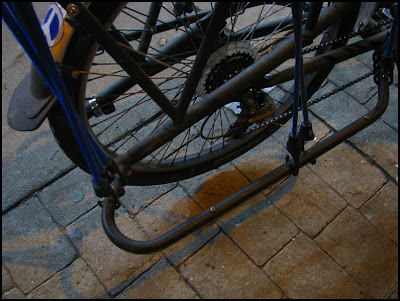