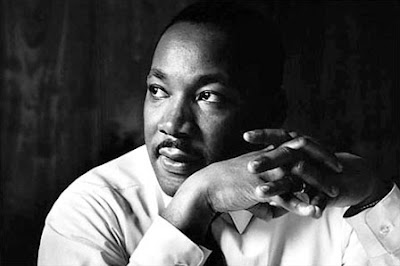 "A nation that continues year after year to spend more money on military defense than on programs of social uplift is approaching spiritual doom."

"An individual has not started living until he can rise above the narrow confines of his individualistic concerns to the broader concerns of all humanity."

"Every man must decide whether he will walk in the light of creative altruism or in the darkness of destructive selfishness."

"History will have to record that the greatest tragedy of this period of social transition was not the strident clamor of the bad people, but the appalling silence of the good people."

"Nonviolence means avoiding not only external physical violence but also internal violence of spirit. You not only refuse to shoot a man, but you refuse to hate him."

“We must rapidly begin the shift from a "thing-oriented" society to a "person-oriented" society. When machines and computers, profit motives and property rights are considered more important than people, the giant triplets of racism, materialism, and militarism are incapable of being conquered.”

“We are now faced with the fact that tomorrow is today. We are confronted with the fierce urgency of now. In this unfolding conundrum of life and history, there "is" such a thing as being too late. This is no time for apathy or complacency. This is a time for vigorous and postive action.”

“Let us not seek to satisfy our thirst for freedom by drinking from the cup of bitterness and hatred.”

More in the Five Quotes Series.