Past and Present...The View from My Handlebars (#2) 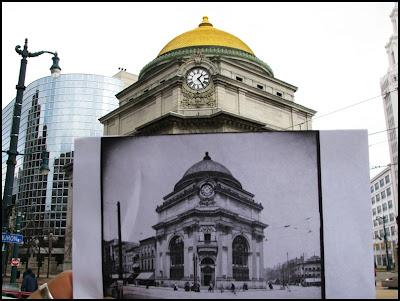 This is really a continuation of a previous post that is similar. I had the day off today and went for a bike ride downtown (on a cold, cold day I may add) armed with a couple cameras and prints of old photos. All of the original photos were taken--I believe--somewhere between 1895 and 1910. And one of the most interesting things, I think, is how it feels to be standing and taking photos in the same spot--or close to it--as the original was taken. Anyhow, the photos are as follows: St. Paul's Cathedral in what was then known as Shelton Square (I've not heard it referred to as this in my lifetime). The next photo is of the original Buffalo Savings Bank (the Electric Tower, which was built in 1912, is of course not in the original). Next is Lafayette Hotel as viewed from Lafayette Square. The two remaining images are a bit sad, I think...at least the current versions are. The second to last is a view of Swan Street in Buffalo facing east and looking past Main Street. The building on the left and in the distance is the Ellicott Square Building, but in the current day image of today an entire block of buildings on the right side are gone. And lastly, the bottom image is of Buffalo's original YMCA. The building still stands but is all but obscured by our extremely ugly convention center; the building is now called Olympic Towers and houses restaurants, offices, and a health club. Click any image for a larger view. 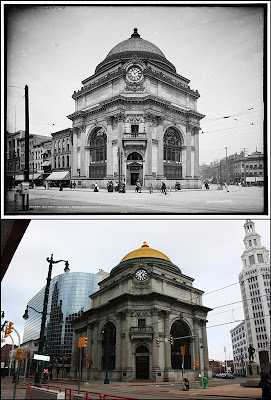 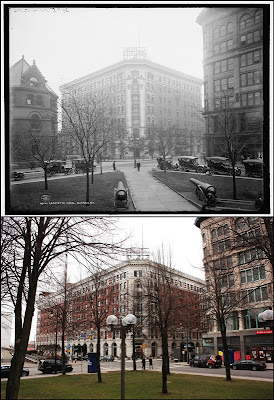 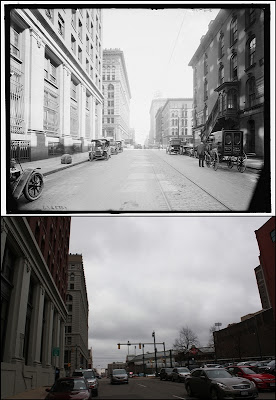 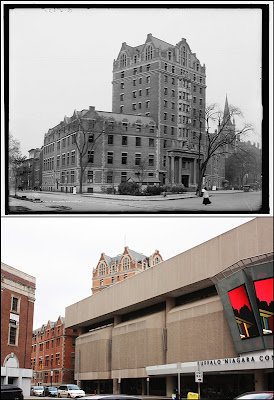