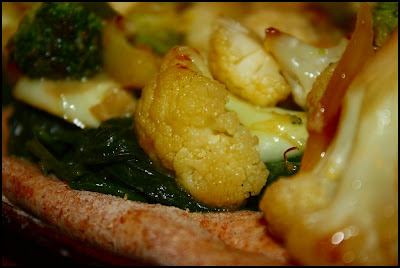 I bake bread about once a week, sometimes more frequently. And most often it is made with whole wheat flour. Sometimes the bread making coincides with dinner time, as it did tonight. So after the first rise I will sometimes pinch a piece of the dough off and make a small pizza for dinner as well...hence the two (loaves) plus pi (pizza pie). And often I will quite literally put whatever I happen to have in the fridge on the pizza. If you really think about it, what is pizza? It's nothing more than flat-bread with stuff on it. Tonight, for example, I found small container of cooked spinach, and a half head of both broccoli and cauliflower. So I cooked everything aglio e olio (seasoned with plenty of aglio and hot peppers), topped topped it with cheese and baked it. I ate it with a small salad while I baked the two loaves of bread. It was one of the most flavorful pizzas I've had in quite a while. Sometimes it's the simplest concoctions that turn out the best. To make this pizza crust use any of the whole wheat bread recipes found here. And to see how to cook virtually anything aglio e olio, see these links. And in the meantime...make some dough and put some stuff on it... 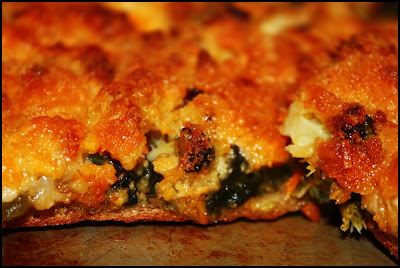