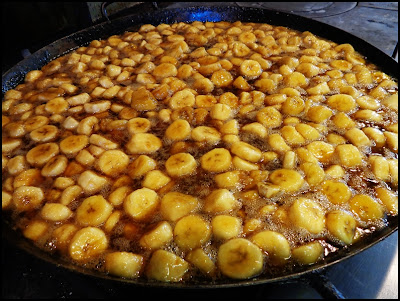 Okay. So a few things first. This dish is so easy to make you won't even have to think about it. It is really, really delicious. But it's also really rich (every so often is ok, right?). The image above is the recipe in large quantity; I made it today for 120 people (in that recipe there is 4lbs butter, 4 lbs brown sugar, an entire bottle of rum, and 65 bananas).  Also in the recipe above the bananas are sliced crosswise, rather than the traditional lengthwise (which I recommend, but a crosswise is easier to handle with a large batch). This dish was invented at Brennan's Restaurant in New Orleans in 1951 to honor Richard Foster, who at the time lead the New Orleans Crime Commission and was a good friend of Owen Brennan and a  regular at the restaurant. Anyhow, here's a recipe for four servings.

Heat the butter and sugar in a large skillet; stir to dissolve the sugar. Add the bananas and cook them for a minute or so, until they begin to brown. Carefully stir in the rum and allow it to flambe. Spoon the bananas and sauce over the ice cream.

Sarah Park said…
This is my one of my favorite foods. This is typically sold outside of our school and perfect during snack time.
February 7, 2013 at 5:52 AM