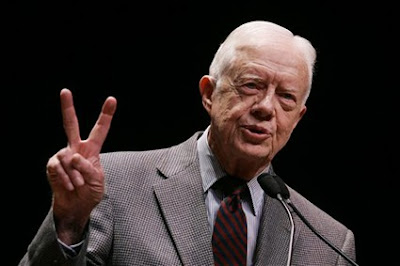 Image Found Here.
Okay...so I know I said five quotes, but I could have gone on for quite a while. I find this man truly inspiring. For more in the Five Quotes series, click here.

"This view that women are somehow inferior to men is not restricted to one religion or belief. Women are prevented from playing a full and equal role in many faiths. Nor, tragically, does its influence stop at the walls of the church, mosque, synagogue or temple. This discrimination, unjustifiably attributed to a Higher Authority, has provided a reason or excuse for the deprivation of women's equal rights across the world for centuries. At its most repugnant, the belief that women must be subjugated to the wishes of men excuses slavery, violence, forced prostitution, genital mutilation and national laws that omit rape as a crime. But it also costs many millions of girls and women control over their own bodies and lives, and continues to deny them fair access to education, health, employment and influence within their own communities.... The truth is that male religious leaders have had -- and still have -- an option to interpret holy teachings either to exalt or subjugate women. They have, for their own selfish ends, overwhelmingly chosen the latter."

“Homosexuality was well known in the ancient world, well before Christ was born and Jesus never said a word about homosexuality. In all of his teachings about multiple things -– he never said that gay people should be condemned. I personally think it is very fine for gay people to be married in civil ceremonies.”

“I have one life and one chance to make it count for something . . . I'm free to choose what that something is, and the something I've chosen is my faith. Now, my faith goes beyond theology and religion and requires considerable work and effort. My faith demands -- this is not optional -- my faith demands that I do whatever I can, wherever I am, whenever I can, for as long as I can with whatever I have to try to make a difference.”

“War may sometimes be a necessary evil. But no matter how necessary, it is always an evil, never a good. We will not learn to live together in peace by killing each other's children.”

“Failure is a reality; we all fail at times, and it's painful when we do. But it's better to fail while striving for something wonderful, challenging, adventurous, and uncertain than to say, " I don't want to try because I may not succeed completely.”