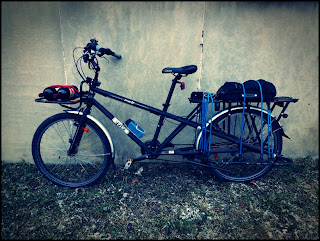 A brief story...I coasted up to the community center at my usual time (and before I had the wine on the bike and wet clothes in the bag), which is also the time that parents often pick up their kids from their after school program. A few minutes prior--as I was pedaling my way there, it started to snow a little, then a little harder, then really hard. It only lasted a few minutes, and we've had a few of these brief snow squalls today. Anyhow it was snowing pretty heavy as I was locking up the bike near the rear door of the building. And as I did this two men came out with a small group of kids (5 or 6 of them, and they couldn't have been more than 7 years old). The kids burst through the door when they saw the snow and two of them--simultaneously--yelled, "Daddy, it's snowing!" To which the one man replied with furrowed brow, "Ugh! Yes...it is snowing." Another kid, without saying anything, simply put his head back and stuck out his tongue to catch the big fat flakes in his mouth. Seeing this, two other kids followed suit, smiling. Their enthusiasm was contagious...it made me smile.

A few comments...And as I walked into the community center I not only wondered when (and why) we as adults loose that sense of child's wonder and amazement, but I also thought of this scripture passage...

And he said: “Truly I tell you, unless you change and become like little children, you will never enter the kingdom of heaven."
Matthew 18:3

I've mentioned on a few occasions on this blog that I don't believe in hell; I believe that it is a man-made concept (can't control people without fear) and that we create our own hell here on earth. And inversely, while I do believe in some sort of afterlife--a different level of consciousness--I don't necessarily believe in heaven either, at least not the "traditional" one that one may think of...I also believe that we can create our own heaven right here and now, and on this earth and in this lifetime. But then adult life gets in the way. And maybe this is what this scripture passage is trying to say, at least to me...that we, as adults, should not lose that sense of wonder and amazement about everyday life (such as a sudden snow storm) because it truly is all wonderful and amazing. But, alas, it is--as an American adult--so difficult to remember. I do though, get glimpses of heaven-on-earth. And at the sake of sounding hokey, riding a bike is one way I can achieve this. In a word: freedom. Anyhow, this is what I was thinking about as I swam and then when I pedaled my way home.

Then, as I was pedaling and coasting home (the snow had stopped) I noticed a rather large murder of crows overhead. It was windy and they were flying from leafless tree to leafless tree doing crazy swoops and "caw cawing" loudly while they did it. It was a sort of acrobat, I thought. Rather than crashing my bike--because I was looking up at them as I coasted down a city street--I pulled over and watched them for a few minutes. It was beautiful. I had only my little pocket point-and-shoot camera with me, and I knew they were out of range, but it was so beautiful I took a few photos. Here is one of my favorite. As people passed in their cars I must have looked a bit childish on the side of the road looking up at the sky, but that's ok with me...because I was in my own little two-minute window of heaven. 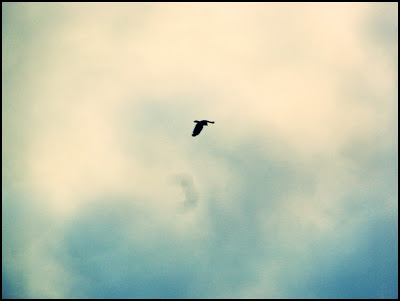