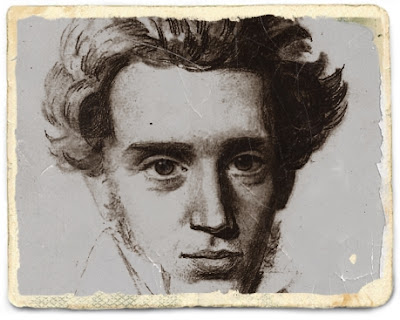 Yes, I know I said five quotes, but here's ten. Could have gone on much longer, really inspiring...

“Life can only be understood backwards; but it must be lived forwards.”

“People demand freedom of speech as a compensation for the freedom of thought which they seldom use.”

“Life is not a problem to be solved, but a reality to be experienced.”

“The most common form of despair is not being who you are.”

“Once you label me you negate me.”

“If anyone on the verge of action should judge himself according to the outcome, he would never begin.”

“If you want to be loathsome to God, just run with the herd.”

“A man who as a physical being is always turned toward the outside, thinking that his happiness lies outside him, finally turns inward and discovers that the source is within him.”

“The Bible is very easy to understand. But we Christians are a bunch of scheming swindlers. We pretend to be unable to understand it because we know very well that the minute we understand, we are obliged to act accordingly.”