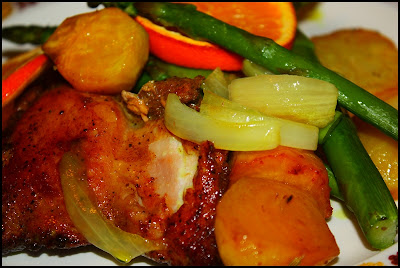 There really is nothing more satisfying to me when I cook at home than being able to do it all in one pot or skillet. This (pictured) is something I made for my son and I for dinner this evening. And this post is really more about a method rather than it is an actual recipe. Because using this method--pan roasting--you can use nearly any food ad it will turn out delicious, trusting that you cook things in proper order. What I mean by this is placing the sturdier items in the pan first, and the lighter ones thereafter. And even more importantly do not pile things in the pan; one layer, maybe two, is about all you can afford if you want the food to caramelize (which translates to flavor). Other key steps are to have a heavy oven-proof skillet (I prefer cast-iron, as I do with most cooking these days), and to have the oven preheated to about 400F. If you'd like to learn a bit more about roasting, here's a link to an article I wrote some time ago. Anyhow, here's how I made this recipe. 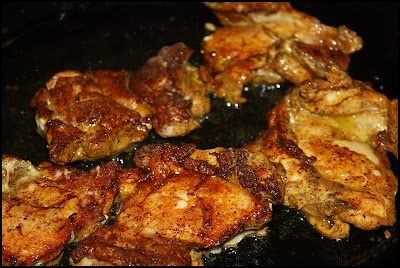 I first marinated a pound of boneless, skinless chicken thighs in a couple tablespoons of Lebanese seven spice mix and a pinch of salt. While the chicken was marinating and the oven was preheating, I peeled sliced/diced the rest of the ingredients. In addition to the chicken I also used golden beets, asparagus, a potato, onion, and whole garlic cloves. When the oven was hot I heated a large cast iron skillet over medium-high heat with a few tablespoons of olive oil. When the oil was hot I added the chicken first and browned it on one side. After turning the chicken over I pushed it to one side of the pan and placed the beets, potato, onion, and garlic in the available space. The I placed the asparagus and sliced orange on top (the image below is the recipe just prior to going in the oven). After a small sprinkling of salt and pepper over everything, I placed the pan in the preheated oven. After about ten minutes I looked in on it and it looked fine but wasn't done yet, so I cooked it for another ten minutes. At this point everything was thoroughly cooked and caramelized. Intensely flavored and cooking in their own juices, this recipe was so delicious a sauce was not necessary. 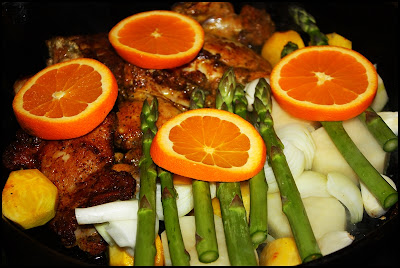