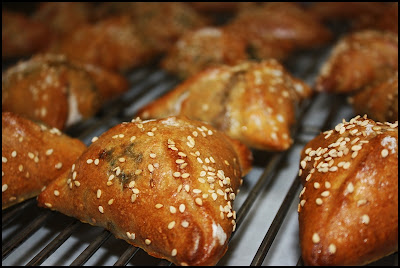 This is a variation on the classic Middle Eastern fatayer (savory pie). These are slightly different in a few ways. One is that rather than using white refined flour for the dough I used 100% whole wheat (delicious). I also used an egg wash on the dough and added sesame seeds. And in the filling I added a bit of crushed hot pepper to give it a slight spiciness. I also made them small(ish) appetizer size, but if you'd like they are equally good when made much larger. These are delicious on their own or with a dip (yogurt-garlic dip is great). Eat them hot straight from the oven, at room temperature, or even chilled; they are healthy and delicious either way. But one thing is for sure...you won't be able to eat just one 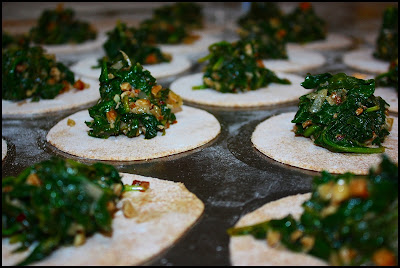 Preheat and oven to 400F. Heat the olive oil in a large skillet over medium-high heat, then add the onion and garlic. Cook the onions and garlic for a few minutes while stirring, or until they just begin to brown. Add the hot pepper and seven-spices and cook for another minute. Stir in a portion of the spinach and—using tongs—turn it in the oil and spices. As the spinach wilts add more spinach to the pan, in batches, stirring to coat it, until all of the spinach is in the pan. Stir in the salt and lemon, remove the pan from the heat, and add the walnuts. Transfer the spinach to a bowl or large plate and refrigerate until cool. Roll the dough out until very thin and—using a 4” cutter—cut 24 circles of dough (reserve or freeze the remaining dough for future use). Squeeze any excess moisture from the spinach mixture, and divide it in small clumps amongst the 24 dough circles. Brush the edges of the circle with a small amount of the egg, and lifting the edges of the dough, form each circle into a triangle, pinching the edges together. Brush each pie with the egg mixture, and sprinkle them with sesame seeds. Transfer the pies to one or two baking sheets that have been lined with parchment paper and bake them for about 15 minutes, or until golden. 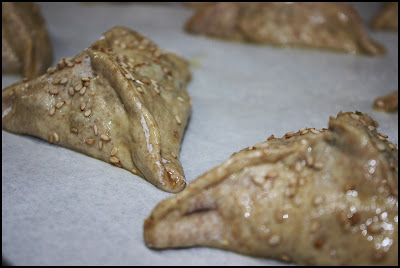 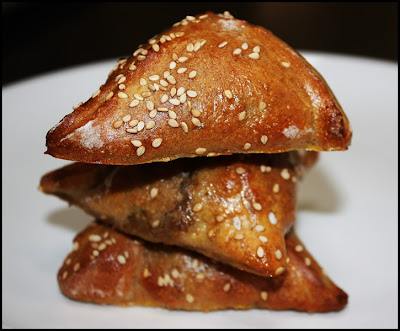