The easiest but also one of the most decadent little cakes you'll ever make... 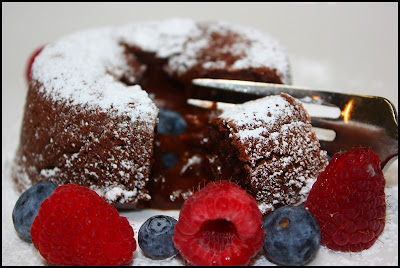 Okay. So first a couple things. This cake (or cakes) is likely the easiest you'll make. It is also super decadent. But the reason I made this is that I became intrigued by a recipe for a 5 minute chocolate mug cake floating around the Internet. I was dubious, and rightly so. I made one of the cakes and have to say that I felt silly--being a professional cook--mixing a cupful of cake batter in a coffee cup and then microwaving it. The outcome was a doughy, sodden clump (I really have difficulty at the thought of microwaving a cake, no matter it's size). Anyhow, the below recipe is an alteration of the five minute cake...it turns into a fifteen minute cake because it is baked rather than microwaved (it's really a variation of chocolate molten cake). And rather than mixing everything in the cup(s) I mixed it like a professional cook in mixing bowls; two to be exact. I can understand a person's desire not to dirty too many things while cooking, but this is a mere two bowls that can be washed while the cakes bake. And as far as difficulty goes, this is no more difficult than the microwaved version but way better. Melt the chocolate and butter in one bowl, mix the eggs in another, then combine everything together and bake it. The recipe makes two small cakes or one larger one (the bake time would be increased for a larger one). Two small cakes, I thought, are also way better than one for many reasons, but mostly because who wants to keep something this good to themselves. 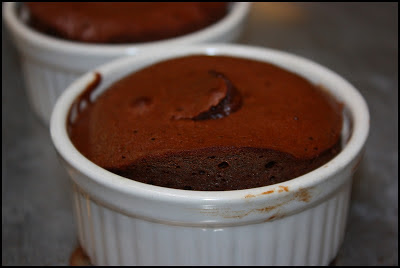 Preheat an oven to 425F. Melt the butter in a small bowl over a boil of simmering water. Using a wire whip, and in a separate bowl, mix the eggs, sugar, and cocoa powder until slightly aerated. Add the melted butter and chocolate, along with the flour, to the egg mixture. Mix until just combined. Divide the batter between two lightly oiled ramekins or other small oven-proof bowls. Bake the cakes for about 10-15 minutes, or until the exterior is cooked but the very center is still slightly runny. Eat directly from the ramekins, or turn the cakes out onto plates. 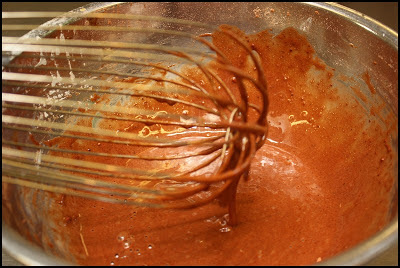