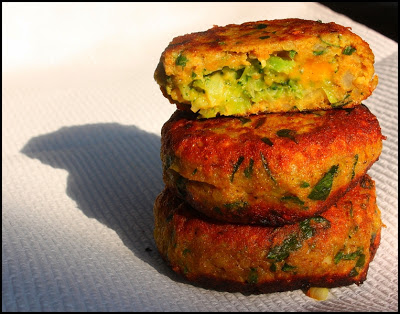 This is a contemporary version (fusion?) of traditional Lebanese kibbeh (pie or patties made with meat or vegetables and bulgar wheat). Most often this is made with meat (and sometimes eaten raw), but there are plenty of vegetarian versions out there as well, and this is just one of them. The vegetable recipes are usually eaten during Lent, but in my opinion are just as good any time. Potato is one of the traditional recipes, but what makes this nontraditional is the hashwa (stuffing)...it is made of broccoli and cheddar. Anyhow, this may look complicated at first, but it's really not. Each recipe is really simple to make. And as always, these are just suggestions, use whatever seasonings or ingredients that suits your needs or tastes. 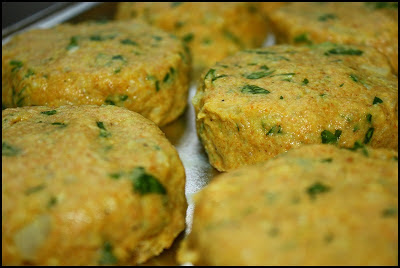 Makes about a dozen patties

Place the bulgar in a small bowl and cover it with room temperature water. Let the bulgar soak for about 20 minutes. Boil the potato until soft, then drain it thoroughly. Drain the bulgar, squeezing any excess water, then combine it with the cooked potato in a bowl and bash it gently, then set aside. Heat the olive oil in a small skillet over medium heat, add the onion and cook until it begins to brown. Add the garlic and cook it for another minute or two. Transfer the onion and garlic to the bowl with the potato and bulgar along with the remaining ingredients (parsley, egg, salt, 7-spice, turmeric, and flour). Mix together thoroughly, then let rest for a few minutes. At this point the kibbeh can be baked in a pan, shaped into balls or patties (stuffed or plain) and fried, or shaped into balls or patties and braised in a sauce. 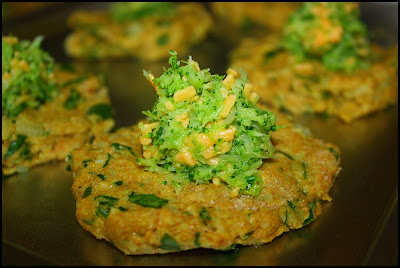 For the Broccoli and Cheddar Hashwa (Stuffing)

To Assemble the Kibbeh

Divide the dough into about twelve balls. Flatten them to about ½ inch. Place a portion of the stuffing onto each piece of dough. Gently lift the dough with the stuffing (you'll likely need a spatula for this), and with wet hands wrap the dough around the stuffing, sealing it in. Shape the dough into discs, patties, balls, or football shapes. Cook to your preference (fried, baked, braised, etc). 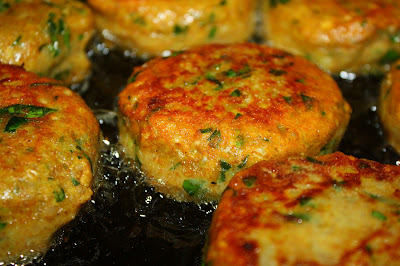 Heat the olive oil in a small sauce pot over medium-high heat. Add the onion and pepper, then the garlic, cooking them until they just begin to brown. Stir in the crushed hot pepper, salt, and turmeric; cook for a minute or two while stirring. Then add the tomatoes, broth, and lemon juice. Bring to a boil then lower to a very low simmer. Cook the sauce for about 45 minutes, stirring frequently, until the lentils are soft and the sauce has reduced and thickened. If it becomes too thick, add additional broth. 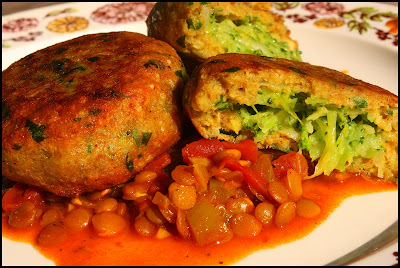