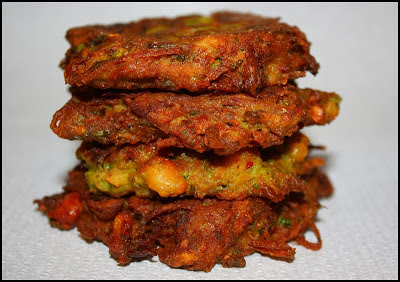 Okay, so you're probably looking at these pictures and recipes and thinking a few things. (1) This looks really delicious...they are. (2) They and their sauce look really difficult to make/use a lot of pans, etc. to prepare....these are really simple to make and require only a knife, skillet, bowl, and hand grater to prepare. If you know how to grate stuff, mix stuff in a bowl, and cook something in a frying pan you can do this. (3) They're probably greasy because they're pan-fried...they're not. If the oil is hot and they are drained well these are crispy on the outside and succulent on the inside.

These are, in a way, a meal in themselves...potatoes, beans, vegetables, egg, and a vegetable sauce. Eat them as is or with a salad (which I did), but make extra because you (or anyone else that happens to be around) will be eating them straight from the pan. 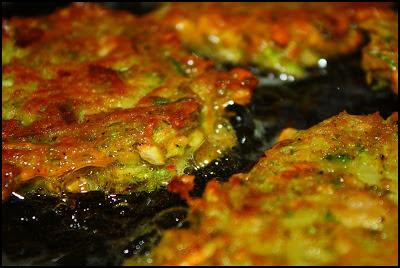 Makes about a dozen small pancakes

Combine all of the ingredients except the oil in a bowl and mix well. Let rest for a couple minutes and mix again. Heat about ¼ inch vegetable oil in a large heavy skillet over medium-high heat. When the oil is hot, carefully spoon dollops of the mixture into the pan. Flatten the pancakes slightly and cook them for about 7 minutes, turning them a few times to cook evenly and brown. If the oil becomes too hot lower the heat. Transfer the pancakes to absorbent paper before eating. 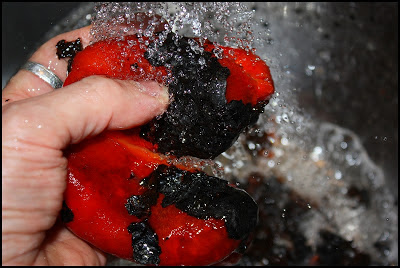 Combine all of the ingredients in a blender and process until very smooth. This is delicious warm, at room temperature or chilled. 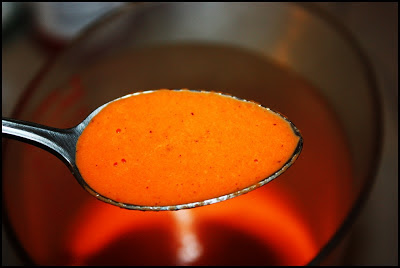 How To Roast A Pepper

Roasting peppers is a simple thing to do and the flavor that it adds to a dish is excellent. This is an ancient technique of cooking vegetables where the peppers are not actually roast in the oven but are “roast” over an open flame. The skin becomes charred black as night. With a little steam the skin just about falls off the pepper leaving only the tender cooked flesh with a light smoky flavor. This can be done outside over a grill or directly over the open flame of the burner on your stove.

The first time that I had seen this done was while I was at culinary school in the mid 1980’s. The chef instructor had a thick German accent and when he told me to put the pepper over the flame of the burner I thought I had heard him wrong and instinctively reached for a skillet. After telling me again he became frustrated and grabbed the pepper from my hands and put it on the flame himself. At the time I thought he was nuts, but when I tasted the resulting product I knew that he wasn’t. Thus, to roast a pepper do this:

Remove stickers from the pepper. Place the pepper directly on the grate of your gas stove with the flame adjusted to medium. Using a set of tongs turn the pepper ever couple of minutes until the entire outside is completely black. Immediately place the pepper(s) into a small paper bag and seal it closed. Allow the pepper to rest for a couple of minutes. The steam that naturally occurs loosens the skin. Remove the pepper, and while holding it under cold running water gently rub of the blackened skin (it’s wise, but not essential, to do this over a small colander to catch the skin, which may clog the drain). After the skin is removed gently tear the pepper in two and remove the stem and rinse the seeds. 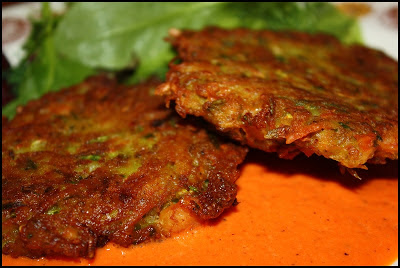 Avimentor said…
Okay, this looked too good to pass up. So I tried out your recipe. Fantastic! The roasted red pepper coulis was easy to do and, hmmm tasty!