Fishing for night swimmers...and a few photos of the international border in my backyard

If you've been to this blog before you know that I am typing from Buffalo, NY. And sometimes I forget that there is an international border and another country in my backyard (the awesome country of Canada). A mere eight minute bike ride from my house brings me to Broderick Park, which leads to Bird Island Pier (a slim walkway--a break wall--that separates the very beginnings of the Erie Canal with the Niagara River at the mouth of Lake Erie (click here to see how the pier's thin line juts out into the lake, and here to see a photo of it). I hadn't been down there in a while, and when I arrived I questioned why it had been so long. Anyhow, I had it in my head to take a few photos of the Peace Bridge at dusk so I pedaled down. And as I pedaled and coasted down the pier (which was largely deserted because it being evening) I was struck by it's beauty. But then, to my dismay, as I approached the undercarriage of the bridge I could see that there was a chain-link fence blocking further passage because of repairs (the entire length of the pier is at least a mile into the water). You can see the distance in the photos...the top photo I was at the far end of the pier (the restricted section), whereas the below photos I was just beneath the bridge. Anyhow, as I was standing there slightly saddened because I couldn't (or at least thought I couldn't) travel any further down the pier I saw someone approaching on a bicycle, and I could see they had fishing gear attached to their bike. It was a Burmese man about my age (Buffalo has a rather substantial Burmese population). We chatted a bit; he saw my camera gear and I  noticed his fishing gear. I told him how I wanted to go to the end of the pier to take photos. No problem, he said, that's where I fish for night swimmers; some fish only come out at night, he added. He then showed me (and helped me) to hold my bike at a horizontal angle to fit between the railings of the pier, and "walk it" along the stones (which was a rather steep embankment) for about 50 feet, and then repeat the procedure to re-enter the pier. We walked along the canal side, which I'm sure was a steep drop off in the water, and at one point as we were walking he turns to me and says, don't drop your bike, you won't get it back. After we reestablished ourselves on the "forbidden side" of the pier he pedaled off while I set up my tripod; I never saw him again.  It was so tranquil. On my way back I saw two cranes and many dozen geese (who nearly refused to get out of my path). I have to say I was a bit worried about lifting my somewhat heavy cargo bike through the railing by myself but I managed (I had the Cargo-T, not the Yuba). I shot a couple dozen photos as I watched the sun set on the river while I wondered why I didn't come here more often. Click any photo for a larger view. 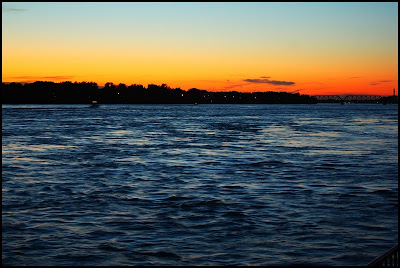 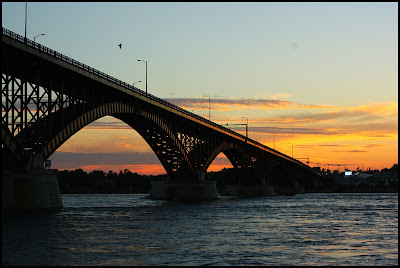 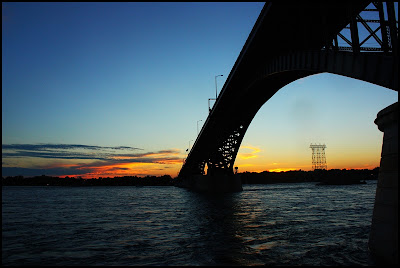