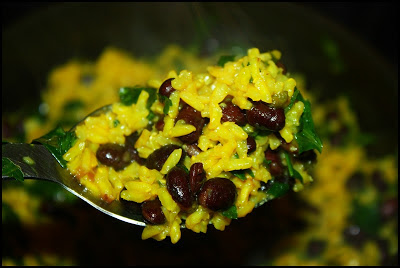 Rice-and-beans (yum!)...what is not to like about this dish. It's simple to make, it is made using one single pot, it is really inexpensive to produce even large quantities, variations are seemingly endless, and it is really good for you...some say it carries complete nutrition (this is an interesting but brief article at NPR). For many peoples around the globe this is a mainstay in their diet. Indeed, for a brief period way back in the mid-1980's I pretty much survived on a 99¢ red beans-and-rice lunch special while living a vagabond life in New Orleans. Rice and beans also fits nicely into the Mediterranean diet, which I love and have pretty much eaten for years without trying. Rice dishes and pasta dishes are the two main dishes that I eat at home. And over the years I've slowly migrated to using whole wheat pasta and brown rice in the recipes, which of course tastes just as good but are so much better for you. Anyhow, because I eat this dish so often--or variations of it--I thought I'd start recording some of the recipes and sharing them. The recipe below is the basic formula for this recipe and the one on which most of my rice pilafs are based. I used canned beans in this particular recipe--which I sometimes do--but to use dried beans simply soak, then cook and drain, a little more than 1/2 cup dried beans, which will yield about the same as a 15 ounce can. The difference between the recipe below and the one pictured is subtle. I added a half teaspoon of turmeric to the recipe (as I do with most my rice recipes because I like the yellow hue and also because turmeric is so good for you). I also added a diced jalapeno, and a handful of chopped parsley and basil that I had growing in my garden. With meat or without (or even with seafood) this recipe is delicious and really good for you. And leftovers taste really good, too... 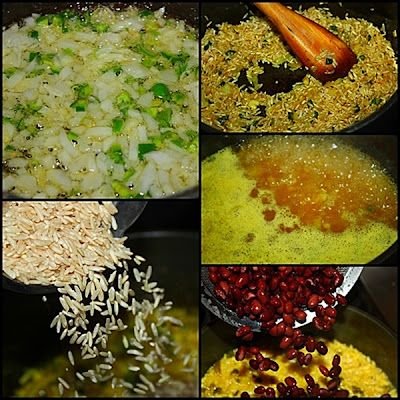 Heat the oil in a small sauce pot. Add the onion and sauté for a few minutes, then add the garlic and cook it for another minute or two. Stir in the rice, then the broth and salt. Bring to a boil then lower to a slow simmer. Cover the pot and simmer simmer the rice for about 30 minutes. Add the beans (just lay them on top of the rice; do not stir at this point). If it looks as if too much liquid has evaporated add more. Cover the pot and simmer for another 10 minutes. Remove the pot from the heat—leaving it covered—and allow it to rest for another 5 minutes or so. Remove the lid and gently fold in the beans. 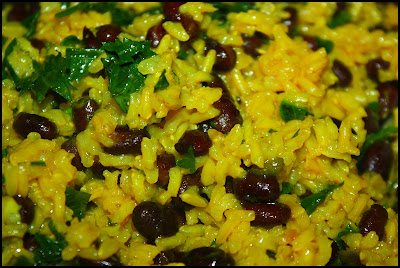