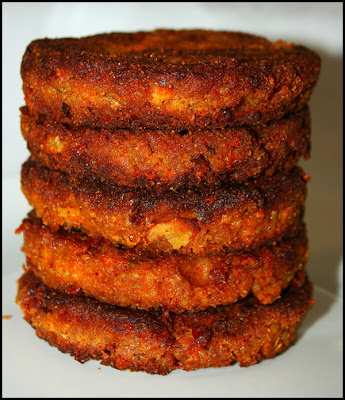 These are a variation of a few different vegetarian/bean burgers I've made and posted somewhat recently, and a play on the classic New Orleans red beans-and-rice recipe. While this recipe is equally delicious it is a bit more labor intensive than my other vegetarian burger recipes (but not really) in that you have to cook rice before you make the burgers. Now I know that if you are a native New Orleanian or have Creole/Cajun roots you will disagree with this recipe. But I mean no disrespect and it is--I believe--really delicious. I've been lucky enough to visit the Crescent City on more than a few occasions and had fallen in love with it at first glance. The first time I was there in the mid 19-80's I was traveling with a friend and pretty much survived on red-beans-and rice for a couple months (which was 99 cents at a local restaurant), and plenty of Dixie beer, too. Anyhow, I hope you try this recipe; it is easy to make and really delicious. 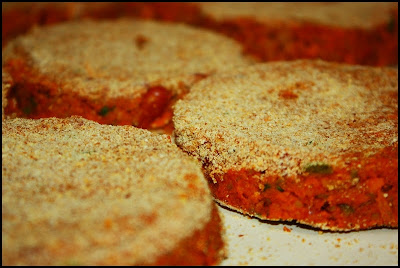 
Heat the olive oil in a small pot over medium heat and add the onion and bell pepper. Cook the onion and pepper for about five minutes, or until they just begin to brown, then add the onion and cook another minute or two. Turn the flame to low and stir in the chili powder, cumin, oregano, paprika, turmeric, and black pepper; cook the spices for a minute to bring out their flavor. Stir in the rice, coating it with oil and spices, then stir in the broth. Bring the broth to a boil, cover the pan with a lid, and simmer the rice for 30-40 minutes or until the rice is fully cooked (if too much broth evaporates before the rice is cooked ad more as needed). Remove the pot from the heat and stir in the beans. Transfer to a shallow pan and refrigerate until cool. Divide the rice-and-bean mixture into two portions. Place the first half in the bowl of a food processor and pulse until coarse but not pureed, then transfer it to a clean bowl. Add the remaining half of rice-and-beans to the food processor along with the eggs, salt, green onion, cheddar, and hot pepper sauce; process until a smooth paste. Add this to the bowl with the coarser mixture along with the breadcrumbs and mix thoroughly. Divide the mix into ten balls and shape into burgers, transferring them to platters or a baking sheet that is lightly dusted with breadcrumbs. Heat a large heavy skillet with 1/8th inch olive oil over medium-high heat. Cook the burgers for about 10 minutes, turning them as necessary, or until golden, crispy, and cooked throughout. Transfer to absorbent paper before serving. 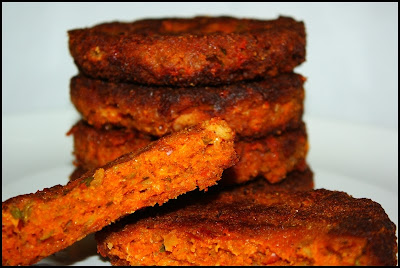