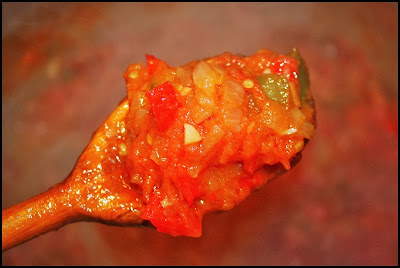 Sofrito is both an ingredient, a seasoning, and a recipe all by itself. It is a simple method of simmering onion, peppers, garlic, and tomatoes in olive oil. But the flavor it imparts can be transformative to a dish. The key here is long slow cooking...it really brings out the flavors. But is often the case, I'm jumping ahead. I've often cooked this way but never gave it much thought. That is until this past year when I began a conscious diet to lower my cholesterol count. Luckily for me the Mediterranean diet is one of the healthiest there is, because it is in fact my favorite way to eat...I just need to cut out the chocolate chip cookies and french fries. So lately I have been doing a bit of research. I had known of sofrito for years but never really gave it much thought as being really good for you, but it is (click here, here, or here). Sofrito can be combined with other ingredients such as rice (it makes a rice pilaf taste great), it can be the base to a great pasta dish, topped over vegetables, or used as a base to braise fish. The simple procedure goes like this...line a pot or skillet with olive oil and heat it over medium heat. Add diced onions and peppers and simmer/saute them until they begin to caramelize. Add minced garlic and saute a minute longer, then add fresh or canned tomato. Simmer until the moisture of the tomatoes evaporates and the mixture sort of mashes together and begins to caramelize again. And that's it. Add other herbs or spices if you like, or not. Anyhow, if you are interested in learning if you are in fact eating a Mediterranean diet, here's a brief quiz at the New York Times.