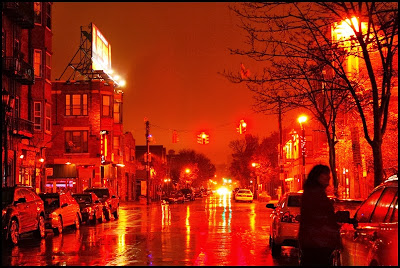 So I haven't posted much in the last few days--or a week--for a few reasons. The first is that my life has seemed to get increasingly busier (am I the only one that feels this way?). And the second reason is that I've had a mild lens malfunction on my camera as of late. From my very first post on this blog (ok, second post), I've made the commitment to have at least one photo with each post. And as I've gradually made the transition from 35mm (of years ago) to my little point-and-shoot cameras, and now to my entree level dslr, I've become somewhat spoiled. Spoiled when I can't get my camera(s) to capture what actually I see in front of me. Thus was the issue with my malfunctioning lens. Anyhow, I recently purchased (it just arrived today, actually) a refurbished lens and was hellbent on testing it even though it was raining. So tonight, being slightly fortified with a couple glasses of wine--and armed with my camera, three lenses, a tripod, and an umbrella--I went out in the pouring rain and took a few photos. Here are four of them. Click any for a slightly larger view. 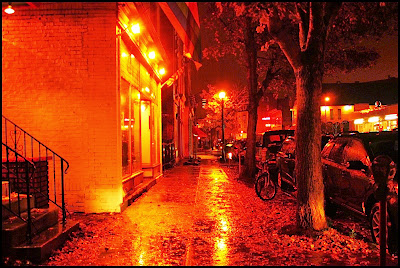 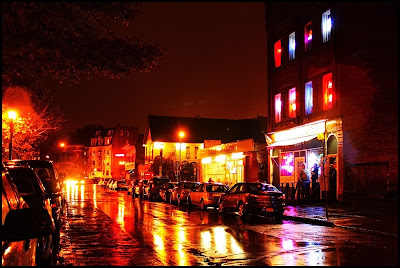 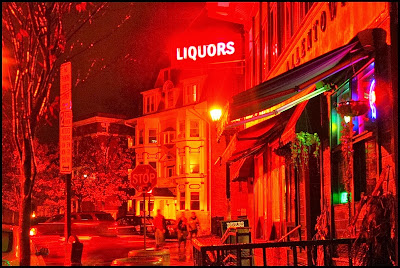 Andrea Weber said…
Hello Joe,
Can you explain just how it is possible to capture the colors you see into your camera and get the same results?
November 9, 2013 at 7:18 AM

The night photos like this are difficult to explain and to be honest I don't entirely understand it myself. Like with any art, photography (as I'm still learning) is all about light. These photos have a long exposure because of the darkness and when I upload them they appear red. The camera has to be still(stationary) or they'd never turn out.
November 10, 2013 at 10:04 PM