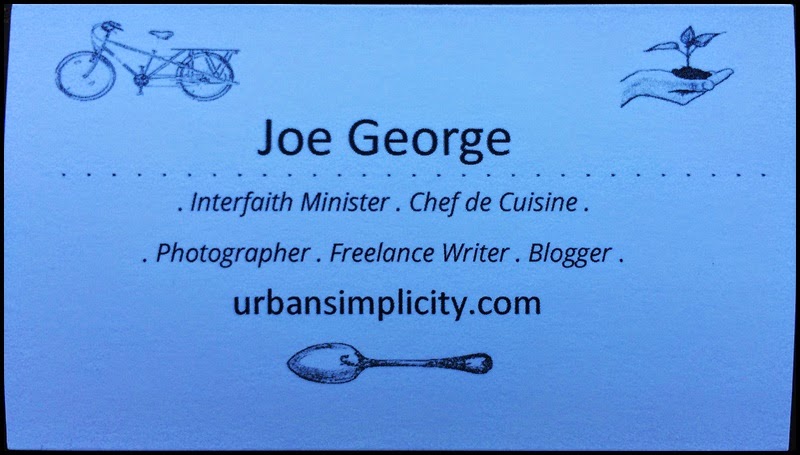 So here's an image of my new personal cards that I just created. Just look at all those fancy titles. It's difficult for me but I'm trying to get better at self-promotion. I've never felt comfortable with titles (what are they really?...just a name) but I still managed to list a few on this card, some of which are new for me. The title which most people will identify with (and the one that I suppose most identify with because it is the one which I've done the most), is chef. But even that took me many years to feel comfortable enough to say when people would ask, "what do you do?" Even after years of working in the role my most common response was simply, "cook." After all, that's what I do everyday--cook. Chef is the French word for "chief," or "boss." Hence, "chef de cuisine" translates as boss of the kitchen. It's only in recent years that I say chef.

And as I type this I can't help but think of two quotes on titles; one I read a while ago and another just recently. I'm not sure in which book it was but I remember reading something by the late inspirational writer, MFK Fisher, about when she was younger she never really considered herself a writer, even though she had been published (I'm paraphrasing, of course). But then her sister finally reminded her that if she were a published writer and she was continuing to write then she was indeed a writer. And it was from that point on that she considered herself one and actually--in her eyes--became one.

So with both of these quotes considered, and all of this said, I suppose the titles I claim on this card are true. I've been cooking in professional kitchens, and in charge of them, for longer than I care to mention (and also have culinary degrees) so I suppose  am a chef. I was also recently ordained as an interfaith minister so I suppose this is true as well. I have photos hanging in a gallery and have sold some as well, I've been published more than 200 hundred times, and I've kept this blog active for nearly ten years. So yes I suppose these are all true. Nonetheless, I don't necessarily feel comfortable with any of the titles, even though they may be fitting. I'd rather just be Joe, plain old title-less me. But if I had to place titles on a card that I really felt comfortable with it would read sort of New Age-y....Father, Brother, Son, Fellow Human on Planet Earth, Child of the Divine.