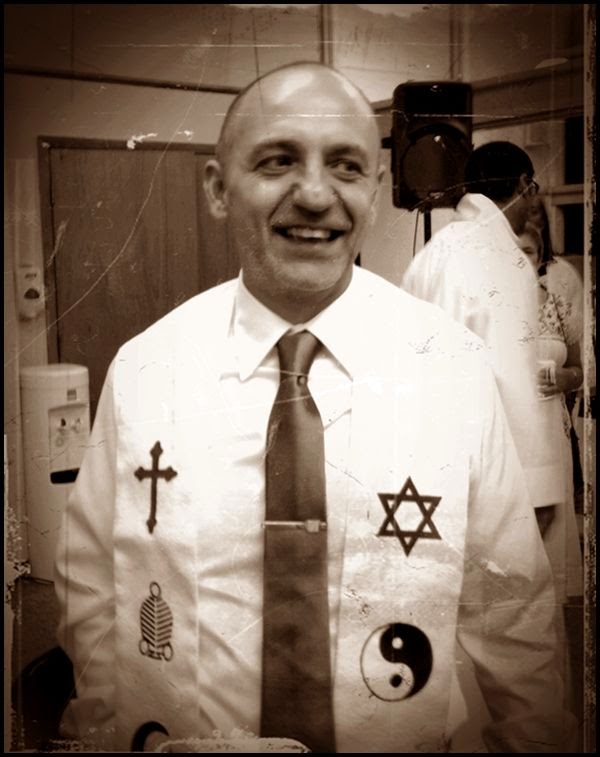 Yours truly on the night of my ordination.
Photo credit: Sandy Chelnov


"Twenty years from now you will be more disappointed by the things that you didn't do than by the ones you did do. So throw off the bowlines. Sail away from the safe harbor. Catch the trade winds in your sails. Explore. Dream. Discover.
~Mark Twain

This post is really a continuation of a post that I wrote last summer, just after completing my first year at seminary. I wrote it at the time for a few reasons. The first was a sort of spiritual “coming out,” if you will. And another is that people are—still—sometimes flabbergasted when they hear I went to seminary..."But Joe, you're a chef,” they say....ok, yes, even if you don't actually say it I can see it in your eyes. Not to worry, I am not stopping being a chef, but more on that in a minute. Anyhow I often find it easier to say things in the written word than I do the spoken one (and this is an example of my fully accepting, and finally embracing, my INFJ personality), so it is easier for me to blog this than speak it. So now, two weeks after being ordained I've decided to post this followup. Like the original post, I'll pose this as a series of questions that have been asked, or those that I think you want to ask but haven’t (to read last year's post on this topic, click here).

I'll get the big question out of the way right away...

So what's the deal, why did you go to seminary? Are you going to be a pastor, work at a church, or be some sort of preacher?

The older I get the more I realize I do not know much about anything. Seriously. But the one thing I do know for certain is that I did not go to seminary to become a pastor of a church. I do not believe I would be good at it, nor do I think that is what I am here for. While I can now legally perform weddings, blessings, funerals and the like I am not going to seek this out. But, on the other hand, I do think it would be beautiful to perform weddings, especially to people I may know, and also to same-gender couples who may have difficulty finding someone to do it. And being an animal lover—and knowing how dear they are to people—I have entertained the notion of offering pet funeral services. But these are just thoughts at this point.

And to answer why I went to seminary....that's not easily explainable. I'll just say this, that it is not something I did on the spur of the moment, and that I did consider it for a couple years prior to enrolling. One of the things that gave me the courage to do it was that I was approaching my 50th birthday. And no, I do not mean I was going through a midlife crisis...some of you that know me also know that neither of my parents made it to the ripe old age of 50. This is something that I think followed me—and possibly my three sisters—like a shadow from an early age. In some ways, I suppose, the early deaths of my parents shaped my life. So for my 50th year I wanted to do something for me, as a celebration of life. And this was it. I have always been a spiritual person so this was just a natural choice. Time goes so fast, and I thought why not? I really want to do this, so I did. And I am really glad that I did. The quote at the top of the page by Mark Twain exemplifies this a little better.

Okay, so you went to seminary and you are an ordained interfaith/inter-spiritual minister—you officially have the title Reverend—but you say you are not going to be a pastor and still want to cook, what's the deal? What are your plans then?

Ahh...another big question. Well, I could easily answer this question by simply saying I don't know. And I am actually getting much more comfortable with saying this. But this never seems to satisfy the person asking it (and this is the question I get asked most often). So I'll have to answer this in a sort of cryptic/metaphoric way...to use the phrase from Parker Palmer, what I am attempting to do is live an undivided life. But to be honest I'm not entire sure how to do this or what I should be doing to do this. But I do know that I am the right path. What I mean by this is that I eventually want to use my cooking skills with ministry training with writing skills and maybe even photography to create some sort of personalized ministry...creating something in some way to give back. I do not have any money to speak of to be a philanthropist but I do have myself to offer and that I think is enough. So how is this going to take shape? I have no idea, and I mean this honestly and literally. I heard someone say recently (not to me directly) that the job you are trying to get does not yet exist, that it has to be created or manifested. I believe this to be true for me as well and I find it very exciting. This said, I am not planning on leaving my current role as chef, nor am I planning on leaving my current job, this is something that I think will develop slowly and in addition to what I already do. My ordination is in addition to what I already do, not instead of. Cooking has been the aspect of my job as chef that I have always enjoyed (cooking, at times, is just a small part of being a chef), and it may sound odd, but going to seminary has made me really appreciate my craft again...personally acknowledging that I am really good at it. For a brief moment I actually had a daydream of opening a restaurant, but then I realized it wouldn't be open long as I would be giving away much of the food to the poor.

So tell me about this seminary...and what is interfaith, is that the same as interdenominational?

The seminary—One Spirit Interfaith Seminary—is not what one would call a “traditional seminary,” nor is it specifically a Christian seminary (I only say this because if you haven't asked me yet I know you are wondering it). It is located on 36th Street in NYC (here's a link to their website which has tons of info). It is a two-year, part-time seminary that studies the worlds religions but doesn't focus on any single one, and also trains its students briefly in counseling and ceremonies. As the name suggests, their premise is that there is but One Spirit (or God, Universe, Source, or whatever name you care to name It). In the last two years I have commuted to-and-from NYC twenty times, only missing two classes in person each year (which I then attended via Webinar). Attending this program stretched me in more ways than I could imagine or that I could explain in this post. But it was truly a beautiful experience and I am changed because of it.

Okay. So you're losing me a little. Do you abide to any one faith? Are you, for example, a Christian? And if so, how can you believe in all that other stuff.

Well let me begin by backing up a little and saying this...just because we studied all the religions does not mean that we are masters in any, I feel this about myself and especially about the faith that I most identify with, which is Christianity. But if what you mean by “being Christian” means going to church on Sunday, saying all the right prayers, and saying that Jesus is the “only way,” then no I suppose I would not be (please do not send me hate mail or try to “save me). To me, being a Christian is not about “believing” in Jesus but more so about following his teachings and modeling my life after him...of which I usually fail miserably on a daily basis (but there's always tomorrow to begin again). And to address the other portion of the question, I believe all that other stuff because I really do believe—know—that there is only one Divine Presence from whom we are all derived. And to me this is not an old white bearded man in the sky judging us all—to me God is not “up there”—but more so the Reality in which we live and move. I believe that He/She/It is in all things, living and not, and including ourselves too...that we are all an extension of of this Omnipresence. This said, I am an active member of a Christian church (Pilgrim-St. Lukes/El Nuevo Camino UCC).

So you still haven't said what you are going to do as your new ministry.

That's because I really don't know yet. But I do know that I am on the right path, and in certain ways I am already doing it. Maybe I'll get a clearer picture in a dream or meditation (hopefully sometime soon). But if you are a person of faith I ask that you say a prayer for me, or at least send kind and hopeful thoughts. And if you think this is all hogwash (which is unlikely or you wouldn't have read this far), still send your kind thoughts and prayers anyhow...it would do no harm, after all, but only help all of humanity. For we are, in some unfathomable way, all connected to one another. But that is a topic for another post...

“The Reality [behind all religions] is one and the same; the difference is in name and form. It is like water, called in different languages by different names, such as ‘jal,’ ‘pani,’ and so forth. There are three or four ghats on a lake. The Hindus, who drink water at one place, call it ‘jal.’ The Mussulmans at another place call it ‘Pani.’ And the English at a third place call it ‘water.’ All three denote one and the same thing, the difference being in the name only. In the same way, some address the Reality as ‘Allah,’ some as ‘God,’ some as ‘Brahman,’ some as ‘Kali,’ and others by such names as ‘Rama,’ ‘Durga,’ ‘Hari.’
~SriRamakrishna

Andy said…
Still love your heart as much as I did for the last two years. You're a blessing and a friend, Joe.

Congratulations on reaching this milepost in your walk.

All I can say do is repeat the words that I live by:

- To thine own self be true.

- Do unto others as you would have them do unto you.