Another face, another very real story... 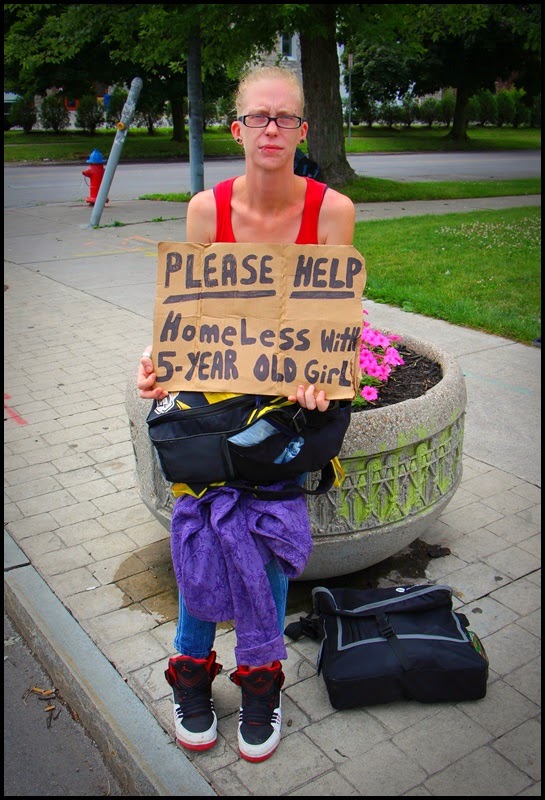 This post is a continuation of one I wrote nearly a month ago regarding the homeless in our city (click here to read it). In that post I mentioned witnessing a women being verbally abused while asking a group of young party goers for some spare change, and also of a man I spoke with who asked me for money on a sunny Sunday afternoon. He told me that he worked full-time (for minimum wage) but still had to beg on the street to support himself. The image above is of Sarah. I met her today while out on my bike. When I saw her sign it was as if my bike stopped itself. After giving her some cash she seemed a bit apprehensive when I asked her if I could take her photo. I told her that I have a blog, work as a chef, and am also an interfaith minister...she then looked at me like I was a bit crazy (and rightly so). Anyhow, we both relaxed and we had a nice but brief chat, this is her story. She's a single mom just as the sign reads. She and her daughter are currently squatting in an undisclosed vacant house with a few other people. They eat mainly at food pantries and with money she earns on the street. She became homeless after her father--in an alcoholic rage--threw her and his grand daughter out in the middle of the night. She has had difficulty getting/holding a job because she suffers from crohn's disease and is concerned about her daughter's safety. I have always been moved by seeing people on the street. And as a person of faith I literally cannot help but respond. But in my own personal view I am not doing enough. While I believe that all faiths speak the same truth, I call myself a Christian. And to me, being a Christian is not just about going to church on Sunday mornings, it is a call to action. If I truly were to live out the gospel I would have emptied my wallet to Sarah (OK, I nearly did...but trust me it wasn't much; I rarely have more than a few dollars on me), or I would have helped in other ways. Tonight when I lay my head on my pillow in my own home with a full belly Sarah and her daughter will be in an abandoned home somewhere. And yes, I am fully aware that she and others I have spoken with and given cash to may be making this all up, that they may in fact be asking for money to support a drug or alcohol habit. But then again, maybe they are not. And if they are not I can't help but wonder how I couldn't be doing more. Because seriously, as you read this, think about it...what if their stories are true. I'll get off my little soapbox now, but not before I ask you to watch the below video (it's only a little over a minute long).