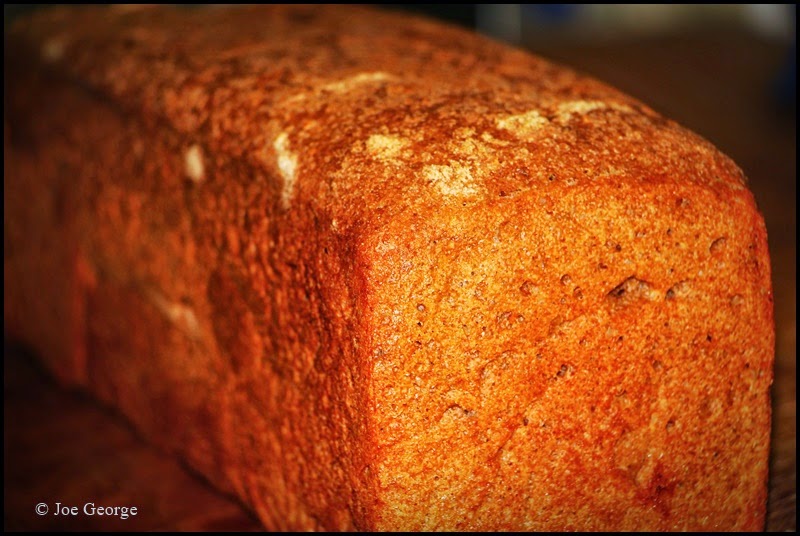 This is a loaf I made today using my Pullman loaf-pan, which I haven't used in a while...named after a Pullman train car because of it's similar long and narrow shape (in french it is often referred to as pain de mie). A Pullman loaf is traditionally a white and squishy and soft sandwich loaf. The one that I made--the one pictured--was made using the following recipe. Good and good for you...simple to make, too. I heard a quote recently that said (and I'm paraphrasing), homemade bread doesn't take a lot of hard work, just time. And this couldn't be more true.

Separate the ingredients into two bowls using this ratio: In one bowl combine 4 cups of flour, two cups of oatmeal, the wheat gluten, and 2 ½ cups of water; stir until just combined. In the second bowl combine the remaining 2 cups of flour, 1 tablespoon of yeast, and 1 cup of water; stir until just combined. Cover the bowls and allow the ingredients to rest and begin fermenting for at least an hour, but up to 12. Then combine the contents of bowl bowls into the bowl of an upright mixer fitted with a dough hook. Add the remaining tablespoon of yeast, along with the olive oil, honey, and salt. Knead the dough on medium speed for about 8 minutes, then cover and allow to rise for one hour. Transfer the dough to a work surface, cut it into two or pieces, gently shape it into loaves. Dust the counter with extra oatmeal and roll the loaves in it, gently pressing oatmeal into the surface of the raw dough. Place the loaves into oiled loaf pans, cover with plastic wrap, and allow to rise for 45 minutes. Preheat an oven to 425F. Bake the bread for about 30 minutes, or until golden brown and sounds hollow when tapped on. Remove the bread from their pans and allow to cool for 10 minutes before slicing.