Before the onion fell...photos and words 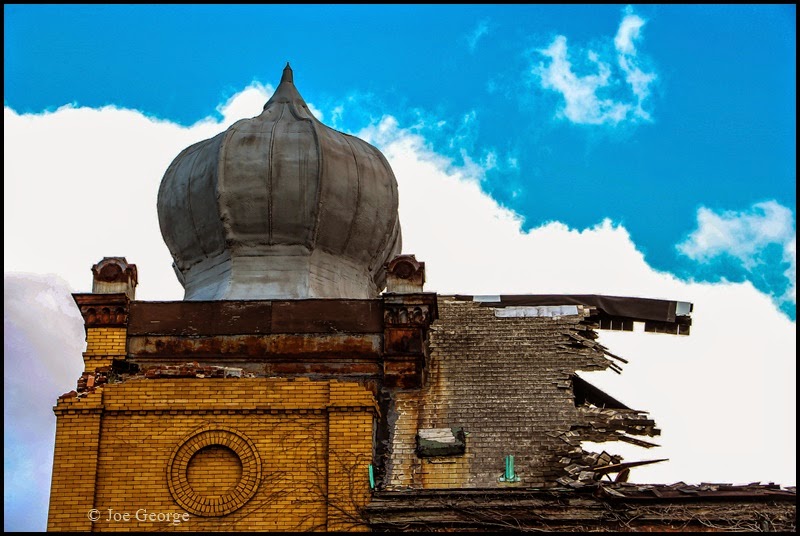 So first a few things. I am not a preservationist in that I chain myself to buildings before they are torn down (though a few people did to this one). Nor do I want to get in the way of "progress" or have a decrepit and unsafe building fall down on its own. But I am someone who has a keen interest in the rich history of the city which I call home. And I am also aware of the many (many many) old houses of worship that are vacant or falling down (though the national movement called Mass Mob may help some of this and in fact originated here in Buffalo and has made headlines in the Boston Globe and most recently the NY Times). This said, when I saw this article in Buffalo Rising this past Saturday as I sat sipping coffee and checking my email I put down my cup and made a b-line to our city's east side. I had first seen this building many years ago and was struck by its unique appearance, but what I didn't know is that it was our city's oldest standing synagogue (the image below shows the building in 1903 and again just before it was demolished). And for the last few decades it has been used as a Christian church. When I arrived I was standing out front and talking to a few others and then I heard the crunching sound. So I locked up my bike and walked to the side of the building. It looked to me as if some sort of ravenous mechanical monster was consuming the building...but did they have to start with the sanctuary?  Was it on purpose...I know nothing about demolishing a building but it seemed even more sad that the very center of the building--where so many generations of both Jews and Christians worshiped--was the first to be eaten. There were still curtains on the windows as the mechanical monster chomped and chomped away. There were maybe a dozen or so people there besides the workers and everyone just sort of stood in silence. And I am not one of those people who sees Jesus in a slice of burnt toast, but I couldn't help notice that there was a distinct cross--part of the debris--hanging from the rafters as the machine chomped (see inset second from the bottom). I had to leave before the onion fell as I had to work that evening, which was fine as I really didn't want to see its most distinctive feature come crumbling down. But this morning I had a doctor's appointment before work which was also on the east side and thought I'd stop by to take a look at the rubble. It was pouring rain and I was soaked (I had my camera wrapped in a plastic bag). I was surprised to see some of the facade still standing (see the very bottom photo). So I parked my bike and took a few photos. As I was walking back across the street to my bike I half-heard someone saying, "who are you?" Not thinking they are talking to me I kept walking. By now the rain is teeming and I am soaked. Then I hear the same question again. Turning, I see a guy with a hard hat and a coffee cup had followed me and was standing in the pouring rain asking who I was. "What, I mean, excuse me," I say. "Who are you," he asks again. "Umm...my name is Joe, who are you?" He then went on a mini-rant of how he was the foreman and that I needed permission to take photos, etc. I was standing on a city street well beyond the cordoned area, I said, and taking photos of a building that was owned by the city and commissioned by the city to be demolished, and that I didn't think I was doing anything wrong and meant no harm. It looked like he was about to blow a gasket. He told me I needed permission to take anyone's photo. I felt bad for him because I'm sure he's been dealing a lot with local preservationists and the press (there were two TV stations there on Saturday). I assured him that I "was nobody" and that I just like architecture and wanted pictures of the building being demolished not the people demolishing it. He seemed a little calmer after that. But as I rode my bike away in the pouring rain I could still hear the monster crunching eating the building--and part of our local history--into oblivion. 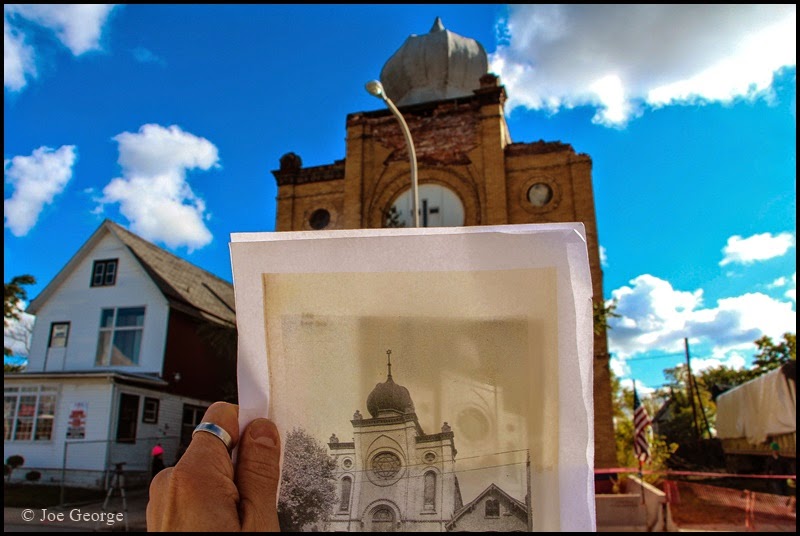 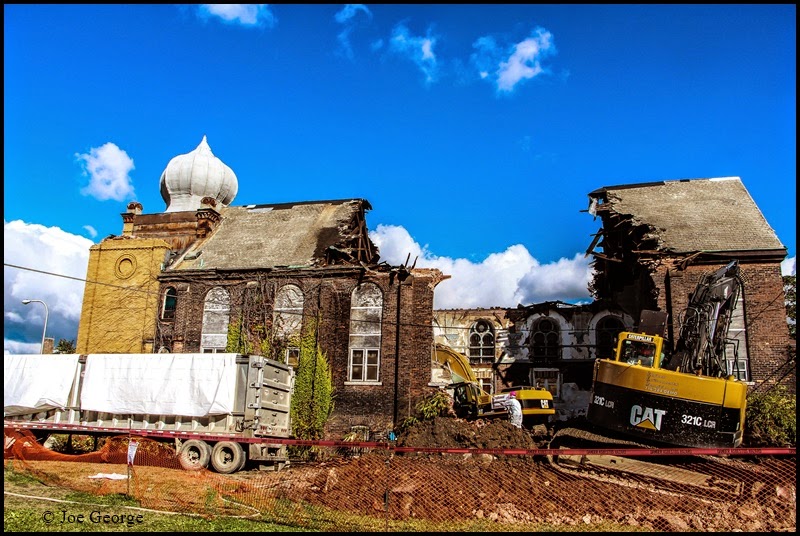 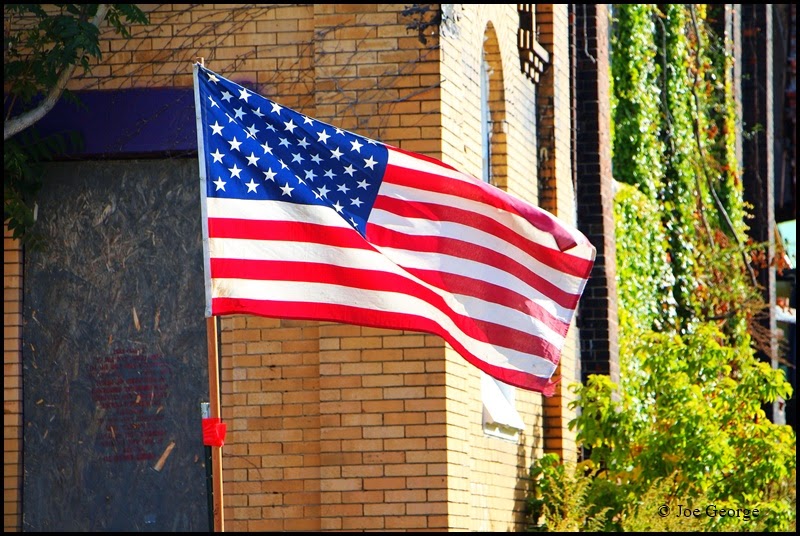 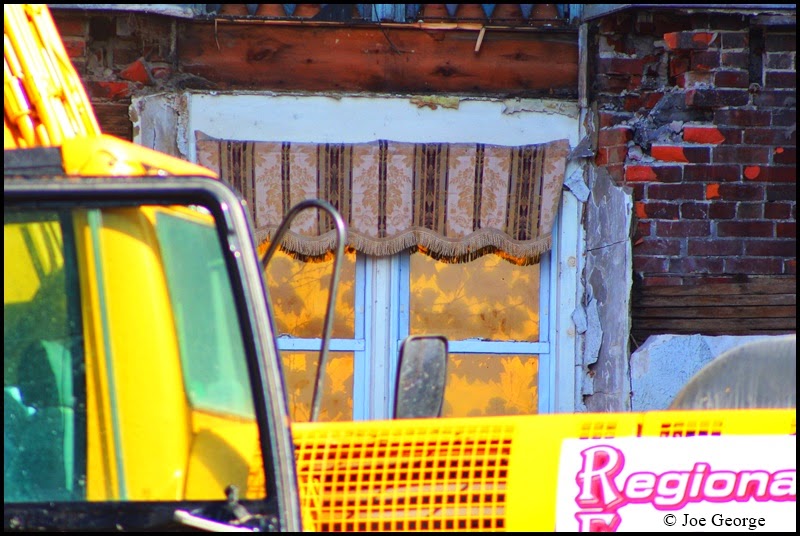 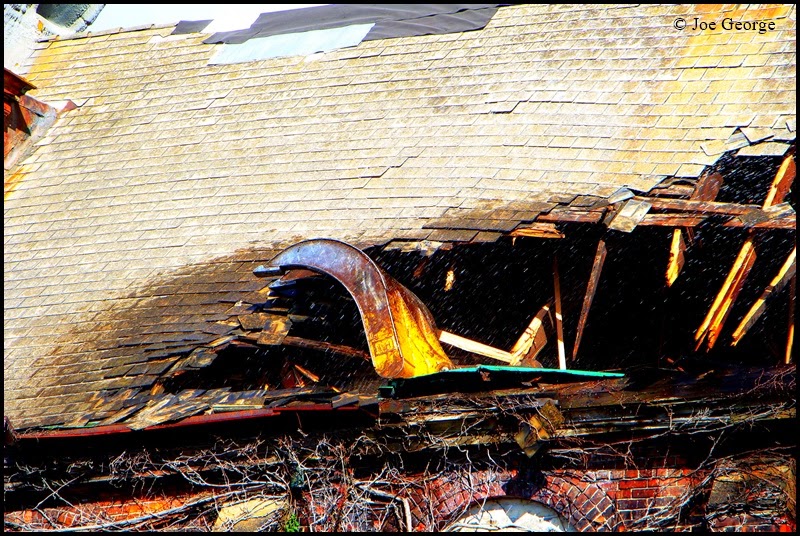 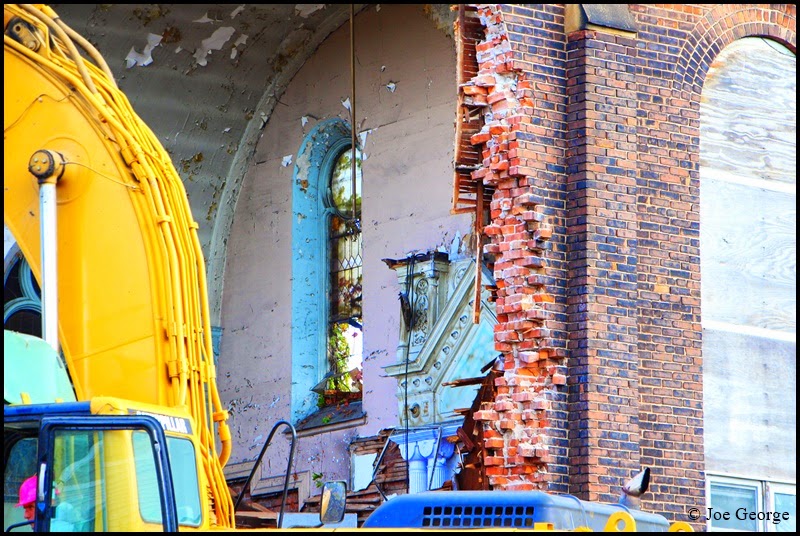 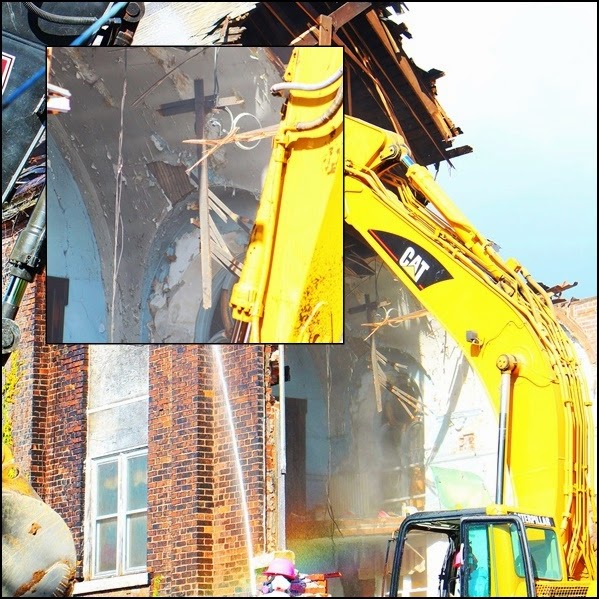 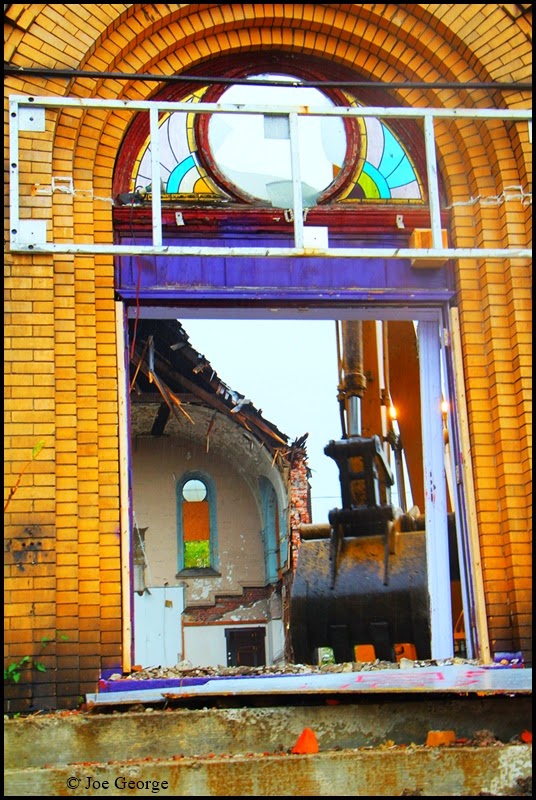 fixBuffalo said…
Thank you for writing about 407 Jefferson. Here's some additional information about what was the city's oldest synagogue building: http://fixbuffalo.blogspot.com/2014/10/today-on-jefferson-avenue.html

The demo contractor attempted to intimidate many people who were taking pictures. It's important to remind others - especially people who are in (relative) positions of power that "WE" can take pictures. The law protects people taking pictures when they are standing on public property - sidewalks, included - 24/7, 365.
October 19, 2014 at 1:20 AM

Joe George said…
Thanks. I was signed up for your bike tour the other day but then had to work. I was actually born on the east side (Ken-Baily area) and have family ties the go back more than a hundred years along Gennesee street. I find myself riding and taking photos there a lot these days, the architecture is really beautiful.
October 19, 2014 at 9:06 PM