Playing with light, color, and motion... 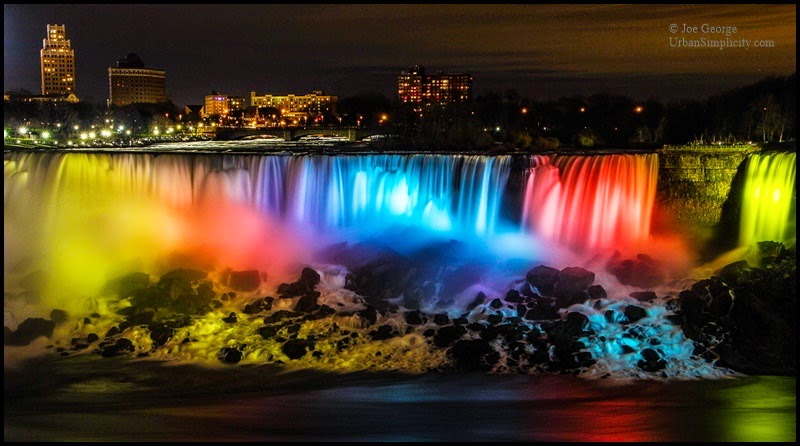 "The principle person in a picture is light."
~Edouard Manet

So yesterday I took the metro bus to Niagara Falls. Even though I live very close to to this incredible natural wonder I rarely get there. I went with the main purpose of taking photos, and being there was sort of like being a tourist in my own backyard. The bus ride incredibly cost a mere $2.00 each way and dropped me off  just 500 feet from the Rainbow Bridge (if you are local and would like the bus schedule, here it is). I arrived in late afternoon and, after having a lunch at an inexpensive Indian restaurant, walked across the bridge and was immediately thrust into tourist-ville. I walked about a mile down to the horseshoe falls and snapped a few photos but really wanted evening photos during l'heure bleue, and also later when the falls were lit with colored spotlights. I had time to kill until the sun began to set, so I walked up the uber-touristy Clifton Hill and had a couple over-priced but really delicious Canadian beers. After the beers were drunk, the sun had begun to set, and I felt sufficiently satiated, I headed back out to the horseshoe falls area. To capture that point when the sun has set but there is still light in the sky is often what I try to do. It is, I feel, one of the most magical times of the day, but you really only have a window of about 20 or 30 minutes. It's all about the light, it really is. And this is something that fascinates me about photography...learning how to manipulate it. But natural light--the one offered to use through nature--is the light that cannot be manipulated...you have to wait for it. There are, though, three ways in which one can sort of trick the light and motion, which is a sort of manipulation, I suppose, using your camera. Please excuse me if you are a pro or already know this, as I feebly attempt to explain this in the most basic terms and description...because this is really for myself as I am an ongoing student. Anyhow, the three ways are this...ISO, which adjusts the camera's sensitivity to light; a high ISO makes the camera more sensitive, allowing more light to be captured, but it also creates a lot of "noise," or distortion in the photo, thus most often a lower ISO is desired. The other two ways are aperture, which adjusts how much light is allowed in the camera, and shutter speed which not only allows how long the shutter is open--allowing light into the camera for specific lengths of time--but also purposely blurs certain images when a slow shutter speed is used. Why, you may ask, am I boring you with this? Because this info is pertinent to these photos and why I have four of the same photo but at different camera setting and at different times of the day. The two most distinct examples of this are in the first two images below...they were shot only about a minute apart. The next one was shot after the sun had just set, and the one after that after the sun had fully set and they began to illuminate the falls. The very bottom photo is one I took as I walked back towards the bridge on my way home; it is, of course, the Skylon Tower with lights shining on the falls. And lastly (or should I say firstly), the photo above is of the American Falls as seen from the Canadian side at night. One final note...though I have been to the falls multiple times in my lifetime, when I approached the edge of the horseshoe falls I was quite literally in awe. It really is incredible to see them so close. It really reminded me that I am not in control of anything. Click any photo for a slightly larger view. 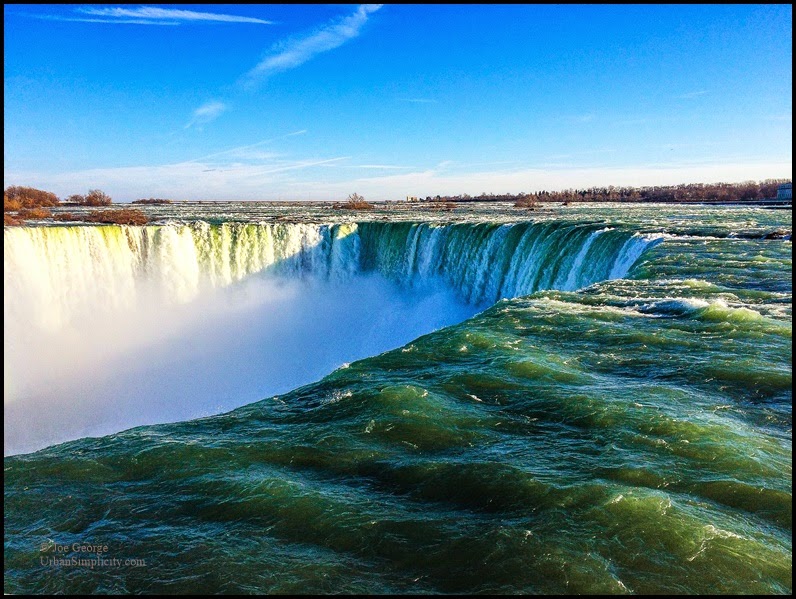 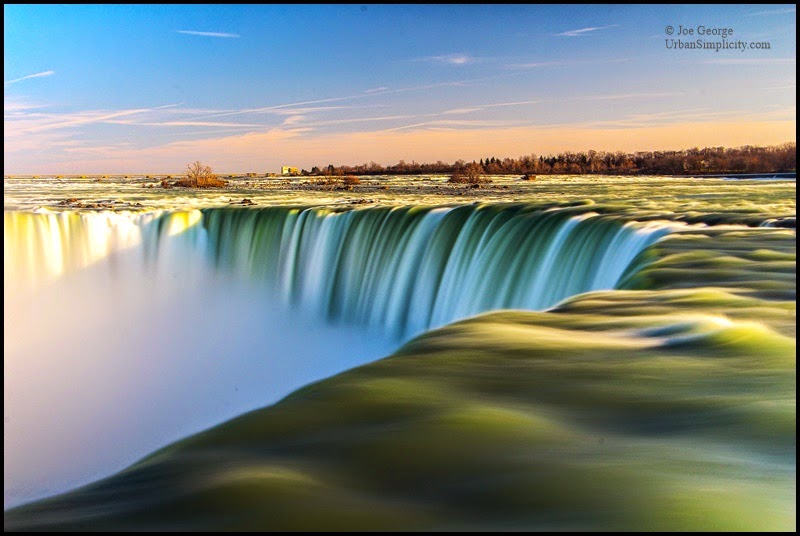 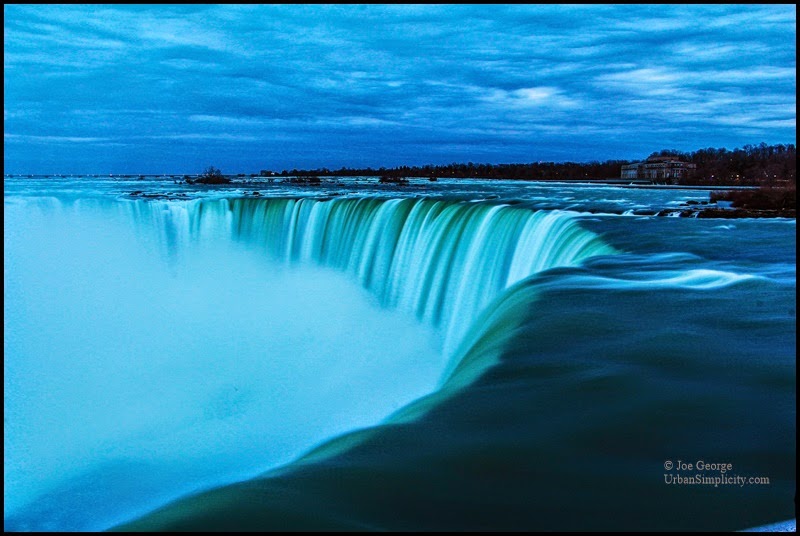 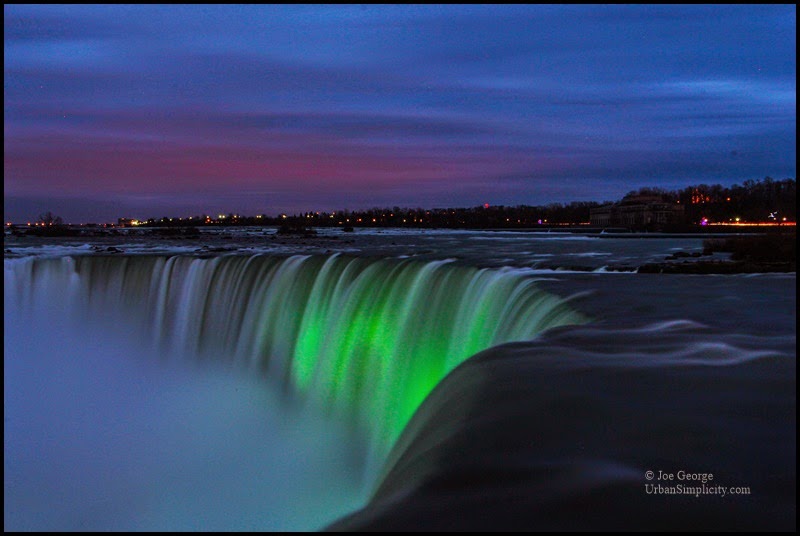 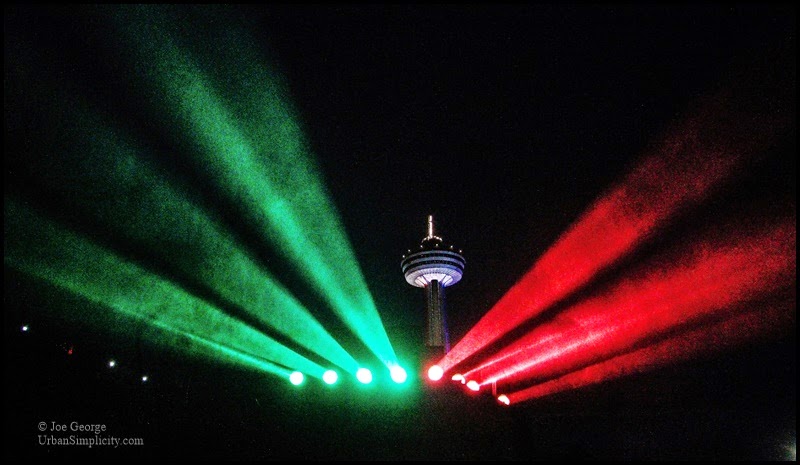 Kim said…
I love the second picture where the water looks like a watercolor painting. Beautiful photos!