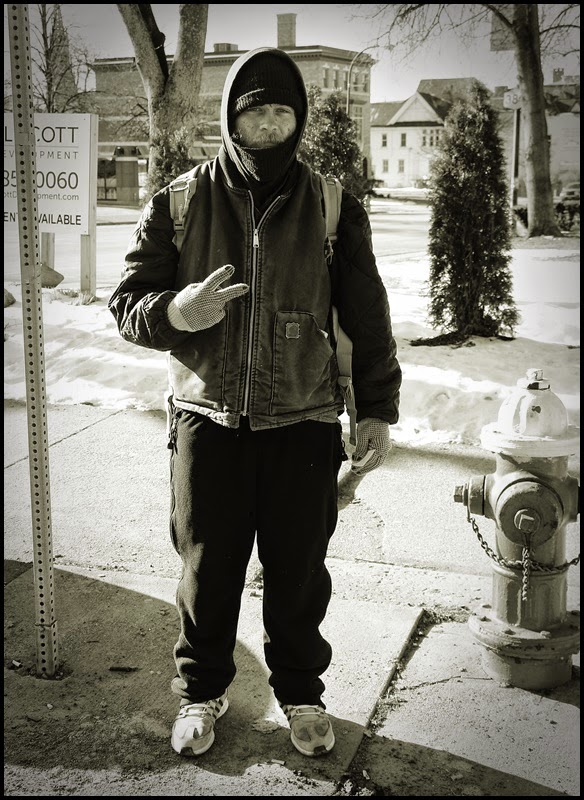 This is Dan. I met him on my way to work this morning. I was riding my bike and feeling a bit disgruntled...disgruntled that I had to work this morning. It was Sunday--Palm Sunday--and I was on my way to yet another day of rushing around a bustling kitchen. My whole career I've always disliked working Sundays. Anyhow, as I approached the corner of Allen and Delaware in Buffalo I saw Dan. He was holding a piece of cardboard and written on it was "Homeless and Hungry."  The traffic light was green and I was running late so I pedaled right past him. It was Sunday morning and there was no traffic anywhere...how long was he standing there in the cold I wondered? And who was he holding the sign for if there were no cars coming? Then I realized he held the sign up as I rode past, he was trying--without saying a word--to get my attention. I couldn't keep going. I was about a city block ahead but I turned round. After introducing myself I asked if he wouldn't mind telling me his story, and he did. It turns out that Dan is an experienced plumber. It's embarrassing to ask for money, he said, but he has no other choice at this point. He was working and had purchased a house in Riverside (North Buffalo) that needed a lot of work, which he planned on doing himself while he lived in the apartment he was renting. Then one day while working on his house he herniated a disc in his back (I have done this as well and know how debilitating it can be). He couldn't work because he was laid up. And while he was out of commission thieves went into his house and stripped it of all the new copper plumbing and wiring that he personally installed. To get to the point...he lost his job, his house, his apartment, and this is why he was standing on the corner this morning trying to get my attention with a sign. We talked a bit. He told me of his difficulties trying to find a place to sleep every night, and how hard it was being homeless last month (the coldest month on record...ever!). But he is resilient, he also said, and he will get back on his feet. He's just got to start over, he added. After giving him a couple dollars I asked I could take his photo, he obliged. We shook hands and parted, and as I rode away I felt guilty for having too many options for work in my life. We all have issues, I know I certainly do. And if I were suddenly unable to work it would only be a month or two before I'd likely find myself in a similar situation. Dan seemed like a really nice guy who has fallen on some hard times, and he is no better or worse a person than I or you. Good luck Dan, I hope you make it, you are in my thoughts and prayers.To read previous posts on the Faces of Homelessness, click here. And if you have just over a minute of time you may find the below video interesting as well.