Mului...and a few other people 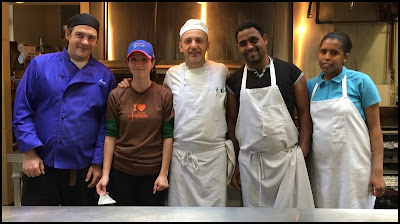 So first some brief introduction. Pictured above is three-quarters of our motley kitchen crew. From left-to-right: Adam, Elizabeth, myself, Mului, and Senait (absent are Dylan, Mohamad, and Leterbrahan). And even though this post is essentially about Mului, it is really--in the broader picture--about humanity. But I'm jumping ahead.

You may remember Mului from this Go Fund Me campaign I posted a little more than a year ago. I was trying to raise money to get him a bike. I had anticipated the campaign to take about a month...it took 20 minutes! No joke. I had to cut it off. The outpouring of human gratitude at the time quite literally brought tears to my eyes, and as I recall it now it still does.

I first met Mului through the International Institute of Buffalo when they assisted him in securing a job. Mului, along with Senait, Mohamad, and Leterbrahan are all from Eritrea, that small country just above Ethiopia. Over the years we've also employed people from Burma, Thailand, Vietnam, the Congo, and Tanzania. As far as I know all of them had been refugees. And their personal stories are incredibly moving. It took Mului, for example, 5 attempts to cross the barren Sahara before he finally made it to a refugee camp in Israel. He nearly died and indeed lost family members along the way, either to the harsh dessert conditions or land pirates.

When Mului started with us he barely spoke English, but over the past year-and-a-half this has improved immensely. And during this time he has--on a dishwasher's salary--supported his wife and two children. Over this time he had really become part of our kitchen family. So it was bittersweet the other day when we snapped this photo...it was on his last day of work with us. He has recently landed a factory job which nearly doubled his hourly pay. Before leaving he gave us plenty of notice and even found us his replacement and trained her.

Coincidentally, the factory in which Mului is now employed is also the same factory that for a while employed my father, who was the eldest first born son to immigrant parents. That was more than 40 years ago and, on the weekends when my dad would work extra hours cleaning, he would bring me with him on occasion to the factory. I have vague memories of following my dad around the stuffy factory offices on hot summer Sunday afternoons.

The reason I mention this is that we as Americans are often proud to proclaim our ethnicity and our family heritage--romanticizing what our parents and grandparents went through and where they hailed from--but at the same time sometimes shun the current wave of immigrants. Most American cities have ethnic neighborhoods and in Buffalo the most diverse these days is the West Side...Grant Street, for example, is lined with shops and restaurants offering goods and foods from the Far East and all points in Africa, and English certainly is the "second language" at times.

Ethnically speaking, I myself am Lebanese and German (with some French, I recently found out). But it is the Lebanese side that I have often Identified with. Mostly I think, because when I was a kid it was like something out of the movies (of course I didn't think that then, but now I view it through Rockwellian rose-colored glasses). My dad and his brothers and sisters and all their families would congregate at our sitti's house (grandmother's house). There were tons of kids, my aunts were always in the kitchen, the table was always full, and the adults spoke Arabic more than they did English.

And this is what I see when I look at these newly arrived refugees. All that I have met and employed have been hard workers and extremely polite. They all are family oriented. They love to talk to me about their food. And they are all striving to earn American citizenship that I myself arrogantly take for granted. A simple Google search will reveal the very real reasons why they risk their lives to get inside our borders. In parallel, I suppose it is not unlike the reasons my family did the same thing about 100 years ago when the border was finally opened after the Famine of Mount Lebanon.

This current wave of immigrants is being called the "browning of America," and I personally find the diversity exciting. And I know right now there is some white guy reading this and getting a little nervous. Ok, here's something else...it's predicted that within less than 30 years white folks will be the minority in the good ol' U.S. of A. Yup true. And I also find this inspiring. I'm inspired when I look at the people, and talk to them, and hear their stories. But mostly I am inspired by their work ethic and family values. These are the faces of the future Americans. Mului tells me his older daughter already prefers to "speak American.," even to her parents.

And so, while this post is about Mului, it's also about humanity as a whole. We are one people, and whether we all like it or not, we also come in all different colors and speak many different languages, but we are still part of the same human race. So on this day, the day that this photo was taken, it was bittersweet. We were all happy for Mului because of his financial advancement, but we were also sorry to see him go. Good luck friend!