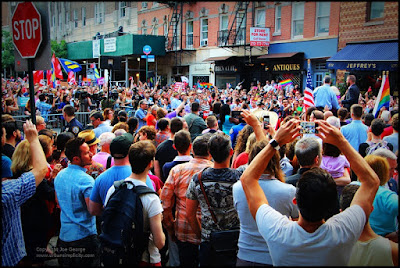 e·qual·i·ty
əˈkwälədē/
noun
noun: equality
the state of being equal, especially in status, rights, and opportunities.

So these are a couple photos I took yesterday on Christopher Street in Greenwich Village. I happened to be in NYC when the marriage equality act was passed and had heard that there was a gathering down there so I went and took a look. The “gathering” turned out to be thousands. It was in front of the historic Stonewall Inn. And it was really moving. People were crying, people were smiling, people were congratulating one another. There were local and state media speaking. And in the air there was hope.

I mentioned this earlier on Facebook, but I have to tell this brief story again. When I first got there I—being a somewhat smallish man—couldn't see because of the crowds. I held my camera in the air above my head but still couldn't get a good shot. I saw a guy standing on a wrought iron fence nearby, so I hopped up as well. I was just about to snap a photo when I hear, “Hey...you can't be up there. Ya gotta get down.” Turning, I saw it was two NYPD. Somewhat intimidated I jumped down and apologized. I told them I was trying to get a good photo. “Well, did you get the photo,” one of them asked? Nope, not yet, I told him. He then told me that I could get up there to take the photo but then I had to get down. I snapped a couple photos. And when I got down I thanked them and they both shook my hand. I found it very moving and it only added to the positive feeling of this historic event. 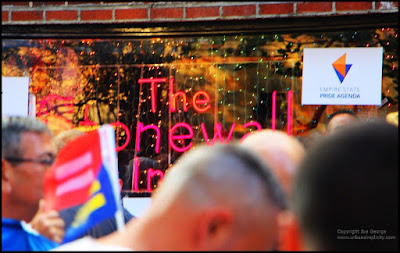 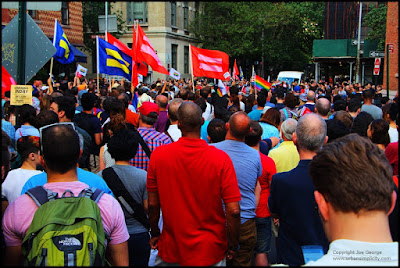