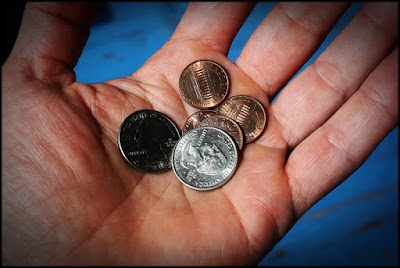 “Instant Karma's gonna get you,
Gonna knock you right on the head”
~ John Lennon

So this is interesting. As I was locking up my bike outside my usual Starbucks this morning a guy came up and asked me for spare change. I told him that I didn't have any change—which wasn't a lie—but that I would buy him a coffee. He sort of rolled his eyes, which ticked me off, but said thank you and that he would wait there for it. I invited him in and ordered two coffees. When they were handed to me I gave him one along with the change that came with them. He seemed surprised and looked at me and said, “Thank you brother; bless you,” and then left the store while I went to a table. After drinking my coffee I went to the counter for a refill, which is 54 cents including tax. And as I stood there I realized I didn't have any cash on me—not even 54 cents—as I had just given the last of it away. I reached for my debit card and commented to the barista that it seemed silly to be using “plastic” for 50 cents. It was the same barista that saw me purchase a coffee for the homeless guy. He smiled and said, “Oh don't do that, I'll get your refill.” All I could do is smile.