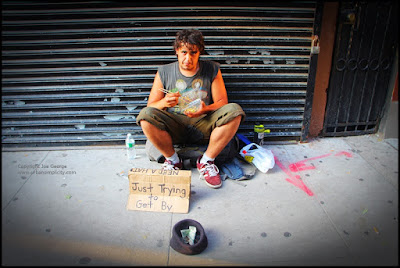 If you've been to this blog before then you know that I have a soft spot for the homeless. My view is that it can happen to any of us. I really believe this. I don't think that a homeless person ever aspired to or thought they would be in the predicament they may find themselves. But they are. As for myself, if I were unable to earn a paycheck it would only be a couple weeks before I would be in financial trouble.

Anyhow, this is Harry. I saw him on 14th Street just off Union Square. I'm in NYC for the weekend and was on my way out for dinner and then a few beers before walking around and taking photos. And as I passed him on my way to a favorite Thai restaurant I saw him eating his dinner on the street.

After dropping a couple bucks in his hat and introducing myself I asked if I could take his photo. Surprisingly he said “sure.” Not all the people I ask agree to have their photo taken, later this day two other guys declined. Anyhow, I told him that I like to hear people's stories, and that I do this to bring an awareness to the homeless or semi-homeless.

Harry told me e was from Kansas City, then had to leave (he declined to tell me why). He first landed in New Orleans, where he squatted with a few other people in an abandoned building. New Orleans attracts a lot of homeless these days, he told me, because ever since Katrina there are a lot of empty buildings. I told him how I lived in NOLA quite a few years ago for a short period (mid-1980's) and that I was actually very near being without a place to call home at the time, and that it was the first and only time I was truly hungry (and somewhat scared).

He then headed up here, to NY where he is sleeping outside a building on the lower east side. We talked briefly about his safety and he was concerned, but where he sleeps now is pretty safe, he said. He also said that he was just going through a rough patch right now, but he'll be ok. After a bit more talk we shook hands and parted. I went to a Thai restaurant while Harry ate his dinner on the street. And as I ate the food didn't taste as good as it usually does. Not that the restaurant was at fault...I stop here whenever I'm in NYC, and it was as good as usual. It's just that I couldn't stop thinking about Harry. I hope he is warm tonight, because as I type these words it is raining outside 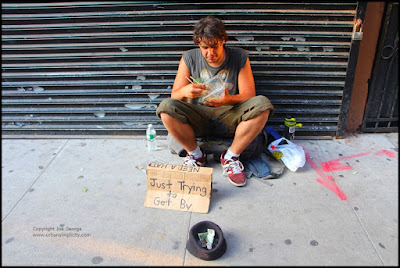