A few photos, a couple (nonsensical) thoughts, and an inspiring conversation 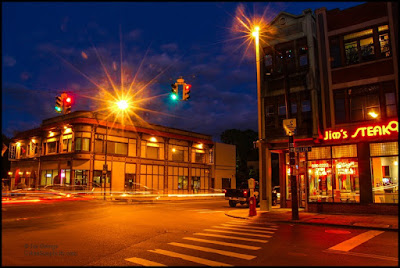 I have a long story (regarding the bottom photo) which I'll make shorter, and I originally posted this--or at least a portion of it--on Facebook, so if you've read this already I apologize for the redundancy. This is a fire alarm call box on the corner of Allen and Elmwood in Buffalo (it's also visible in the top photo on the right-hand corner). Relics from a bygone time, I suppose...here's images of others and they are even available on ebay as collectables). At one time there were many of these around the city, I remember them from my youth. Now there are only a half-dozen (I know this because I saw a city-worker inspecting it one day and he told me so...and yes, this still works). Anyhow, I was talking with a couple youngish co-workers the other day regarding an incident that happened on this corner and they used this as a point of reference but were unsure of what to call it...they didn't know what it was ("It's not really a fire hydrant but it has something to do the the fire department," one said). I mentioned to them that it was a fire alarm...that in the event of an emergency one would break the glass and pull the lever and help would arrive. And then after a somewhat long and uncomfortable silence and perplexed looks I also mentioned that there were not always cell phones available. 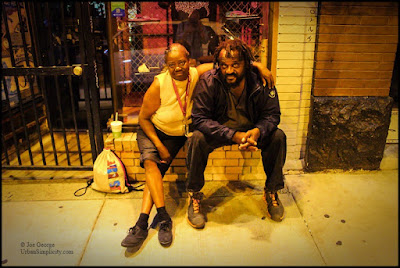 Anyhow, that story aside, I was out taking photos in my neighborhood a couple evenings ago as it was such a nice summer night. And after taking the above photo I began to walk down the street when I was stopped by the couple in the above photo; they asked me for spare change. After giving them what was in my pocket I asked if I could take their photo. "You're not with the mafia or police, are you," the woman questioned? I'm still not sure what she meant by this, but after assuring her I was not with either organization they both readily agreed. The woman rummaged in her bag for some lipstick and then quickly fixed her hair before throwing her arm around her friend. They wanted to know why I was taking pictures. I told them I just enjoy it and that I enjoy meeting people. After introducing myself and shaking hands all around, I learned the woman's name was Rosemarie but goes by Rhianna. Her friend simply told me, "They call me D.O.D." At any rate, we chatted for a few minutes and they actually thanked me for taking their photo. This sort of surprised me but I thanked them in return for allowing it. By stopping to talk to people, I find, that the invisible barrier is broken...instead of two street people and a guy with money in his pocket, it became just three people. Simple as that. But why am I sharing this? Honestly, I am not sure, but I felt I needed to. 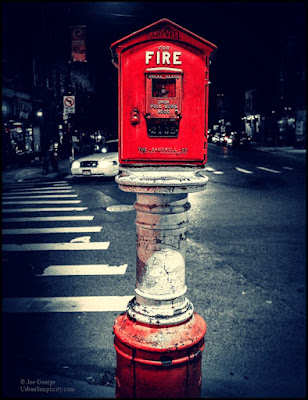