A quiet man on a really cool home-built trike... 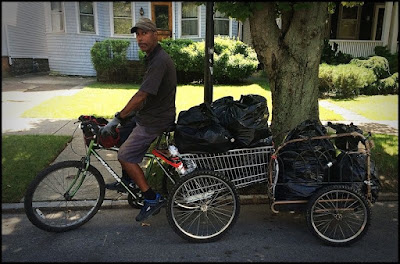 So I wish I could tell you this nice man's name on his home-built trike, but even though he obliged in allowing me to photograph him he didn't tell me his name. But I'm jumping ahead. It was two evenings ago and I had just gotten out of work. I was unlocking my bike when I saw him quietly pedal past me. I was on my way to a second job and he was heading ahead of me down the same side-street as I. He had stopped; he was collecting bottles and cans. I stopped and was admiring his bike while he went between two houses in search of his bounty. The trike, I could see, was obviously home-built. But what was really impressive was that it wasn't originally a trike, it was an old mountain bike fitted with a wide axle and a shopping cart basket welded onto it; it also pulled a homemade trailer. When he emerged from between the houses he looked startled to see me there on my bike. I introduced myself and told him I was just admiring his bike. He then motioned to his ears and mouth in such a way that told me he could neither hear or speak. I gave him my card and made a motion like a camera and pointed at him, asking if I could take his photo. He immediately hopped up on the bike and struck the pose you see above. After a few more hand gestures on both our parts, he conveyed to me that he indeed build the bike himself. Really really cool, such ingenuity. After a few more gestures we shook hands and parted. If you my silent friend are reading this I just want to say thank you. Thank you for meeting me, and also for allowing me to take your photograph. 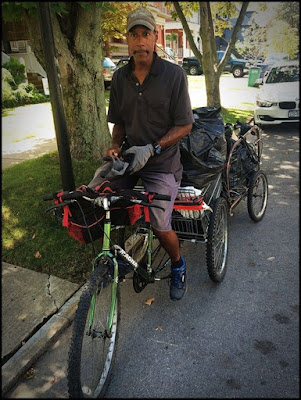