Thoughts from a pew... 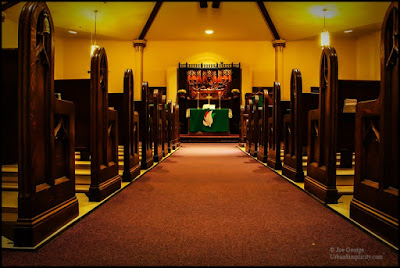 “My faith demands that I do whatever I can, wherever I am, whenever I can, for as long as I can with whatever I have to try to make a difference.”
~Jimmy Carter

I sat in a pew this morning, the first time in more than a month. I'm not sure why it's been this long without attending the church which I love, but it has. But it doesn't mean I haven't been to worship since then. I like to think that I worship the Divine (or God, or Universe, or Spirit, or whatever name you feel most comfortable with) on a daily basis. I worship this Presence when I ride my bike, for example, and when I take photos, and when I have a meaningful interaction with someone, be it a friend, family, co-worker, or complete stranger. I also worship this Presence when I lay in bed in the morning just after the alarm goes off and it's the beginning of a new day. Because, to me, God is in all things (including you and I) and is, in fact, what makes each one of us connected to and inseparable from not only each other in some indescribable way, but also the very source (or consciousness) from which we came and will return. So today I worshiped the Divine more formally, in church. And it felt good.

The guest preacher spoke on the Epistle of James, which is one of the oldest books in the New Testament and is attributed to James the brother of Jesus. It's a somewhat small book but has a powerful and straightforward message. Some say it is a blueprint for daily living. Personally, it has had a profound effect on me and I return to it often. To me, the book is a synopsis of what Christianity at it's core is about...not just having faith in a Higher Power, but having action as well.

“Faith by itself, if not accompanied by action, is dead.”
James 2:17

This morning, before leaving the house, as I was having coffee and scrolling through Facebook I came across a photo of Hungarian citizens lining a highway with crates of food and other necessities. They were just average citizens and not affiliated with any government organization. They were lining the highway with food because they knew that soon, very soon, there would be thousands of refugees walking that road. The image was so moving that it brought tears to my eyes.

Inversely, a judge denying other humans of a very basic right because of “her religion” is not faith at all. And deep down—somewhere beneath the crust of her hardened heart—she knows this too. But she will not allow herself to see it. If she did read the scriptures of her so called religion she would see that Jesus spoke of inclusiveness, not exclusivity.

Prior to the preacher's sermon this morning, a deacon read from the Book of Matthew...

“So in everything, do to others what you would have them do to you.”
Matthew 7:12a

What's interesting, I think is that this statement—which is commonly referred to as the Golden Rule—is stated in many variations in nearly every major religion and spiritual movement. Jesus himself says this rather bluntly at the end of the statement…“For this sums up the law of the profits.” Matthew 7:12b

Judaism: Love your neighbor as yourself.
Hinduism: Do not do to others what would cause pain if done to you.
Taoism: The sage does not dwell on his own problems. He is aware of the needs of others.
Islam: None of you has faith until he wishes for his brother what he wishes for himself.
Buddhism: Hurt not others in ways that you yourself would find hurtful.
Native American: Do not wrong or hate your neighbor. For it is not he who you wrong, but yourself.

Then, during worship this morning, as the congregation stood and recited the Lord's Prayer in unison, it moved me as it often does. The words themselves move me, but so does the thought of so many others around the globe saying this prayer (possibly at that same moment). I hope that some of us—myself included—listened to what we were saying, letting the words sink in and take root.

Last year when I was in NYC I witnessed something I will never forget. A homeless man asked a person to buy him a hotdog from a street vender because he was hungry. The person he asked (wearing a suit) not only bought him food, but he bought himself some as well and then sat on the sidewalk and ate with the man. To me that was not only worship, it was holy communion (Namaste...the soul within me acknowledges the soul within you).

Just being nice to one another—and seeing each person as an equal—can make such a difference in someone's day (including your own). It's not always easy but it is possible. When I write these things I am doing so because sometimes they just need to come out, but mostly because I need reminders for myself. And in a way, this in itself, I suppose, is a form of worship, and when you read this we are in sanctuary together.

And this is what I was thinking about as I sat in a pew on a hot and humid Sunday morning in September.

Unknown said…
Beautifully and clearly written. A simple, yet profound, reminder that kindness is faith in action. I do believe that God works through us, and when we are present and listening to that inner voice, God is part of that communication. When I treat someone else with respect and compassion, I feel that I'm connected to and in alignment with what is eternal. I also appreciated the reminder that the golden rule is a common teaching among many religions. To me, it has always been the core of living a strong, conscious life. Thanks so much for sharing your thoughts snd experiences in this lovely blog post!
September 6, 2015 at 2:42 PM

Magda said…
I have not looked at the Book of James in a long time but reading this had me hunting for it in my old GOOD NEWS book from high school. Loved the story about the hot dogs communion.
September 6, 2015 at 6:58 PM

Thank you so much. I had a very moving day and had to get it on paper...I mean screen :)

Thanks for taking the time to read it.