But who is my neighbor? 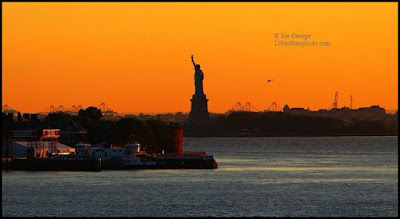 "Give me your tired, your poor, Your huddled masses yearning to breathe free, The wretched refuse of your teeming shore. Send these, the homeless, tempest-tossed to me, I lift my lamp beside the golden door!"

The above words are what is inscribed on the base of the Statue of Liberty. It's a portion of the poem, The New Colossus, by Emma Lazarus. I've been thinking about these words a lot lately. Mostly, I think, because of what has been in the news, and by this I really mean some some of the things spoken by people "in power" with hardened hearts that can't seem to see beyond their own egos.

Some weeks ago one of these--I shan't glorify him by mentioning his name, but you know him...the brother and son of former presidents and is in fact running for office himself--referred to first born immigrant children as "anchor babies." Meaning, I suppose, that the American born baby can anchor it's immigrant parents here without deportation.

And then just this morning I saw a video clip of that other guy--you know, the one with the fake looking hair who is always yelling--where he said if he wins he will deport every Syrian immigrant because they don't belong here and they can't be trusted. What really broke my heart, though, was when he said this the crowd to which he spoke broke out in applause.

And correct me if I'm wrong, but both of these guys--among countless others--would like to "build a wall" to keep immigrants from coming through our southern borders.

If you are like me, and countless other Americans (including the two guys I just mentioned), ancestors on both sides of my family came through New York harbor as they entered this country for the first time. It is doubtful that, even if they could see it, they could read the inscription on the statue because it was written in English, but she is likley one of the first things they saw...welcoming them.

I'm the son of an "anchor baby." And my anchor-baby-daddy fought in the second world war, and in fact lost hearing in one of his ears defending our country. Two of his brothers (also anchor babies by that politician's definition) also fought in the war.

I just can't help but wonder if people (not just the two mentioned above) who are so afraid of others coming to this country (who may seem different than themselves) ever consider what the words on Lady Liberty say, and the fact that our country was founded and populated by immigrants.

And on a different slant, I also can't figure out how so many of these people, who like to quote the bible (yes, I'm aware that I'm generalizing), don't see that the very message of Jesus was not segregation, hate, or exclusion, and that his entire short ministry while on this earthly plane can be distilled down to one word...Love.

Some of my favorite passages in the gospel are the parables, which are told in such a way that makes you think but are also meant to be so simple that anyone can understand them, if they listen. And one of my favorites is the Good Samaritan (Luke 10:25-37).

It begins by an "expert in the law" (today, could this be one of the men aforementioned?) asking Jesus what he must do to inherit eternal life. And by this, I take it as not so much in the next life but this one, what must he do to be free, or to use other terminology, enlightened. And clever as he was, Jesus answered the question with a question, to make the person think for himself. He asked him, "What is written, and how do you read it?" The expert of course was able to recite the scripture exactly..."Love God with all your heart, soul, and strength of your mind, and love your neighbor as yourself."

But the expert needed to justify himself, so he asked, "Who is my neighbor?

And this time Jesus answered him with a story (parable), and I am paraphrasing...it began with a man who was walking down a deserted section of road where he encountered thieves. They stripped him, robbed him, beat him, and left him for dead on the side of the road. As people passed the dying man they crossed to the other side of the road and looked the other way. One of the people was a priest, the other was a Levite (I may be wrong, but I believe the beaten man was also a Levite). Anyhow, finally a Samaritan came along, and correct me if I'm wrong again, but I believe during those times a Samaritan was not supposed to socialize with, let alone physically touch, a Levite. But the Samaritan, being filled with compassion, cleansed the man's wounds with oil and wine and bandaged him. He then carried the man on his own donkey to an inn, where he paid the inn-keeper money to care for the man, and even went so far as to tell the inn-keeper that he will return and pay additional money if needed.

After telling this story Jesus then posed another question to the expert..."Which of these men do you think were a neighbor to the fallen man?" He answered correctly again..."The one who had mercy on him."

To which Jesus replied simply..."Go and do likewise."

Our nation was founded and populated by immigrants, yet there are many who forgot this (or choose not to remember or acknowledge it).

And there are some who hold the bible as a shield and claim (incorrectly) that we are a "Christian nation," yet fail to show compassion, or to quote directly..."Go and do likewise."

And yes, I know many of these statements (my personal statements) are rash generalizations, but it seems (to me) that somewhere along the journey--with all of our technology allowing us to be connected 24/7--we have become less connected than ever before. In many respects we have lost our way. We as a nation have become more about "I" than "we."

The fear that I have is not of being over-run by immigrants, my fear is that one of the men previously mentioned actually wins the presidency.

Sorry for my mini-rant; I'll get off my soapbox now. But before I do I have to pose this question that was spoken more than two millennia ago... Who is my neighbor?

And this is what I was thinking about as I sat in a coffee shop on the first chilly day of autumn.