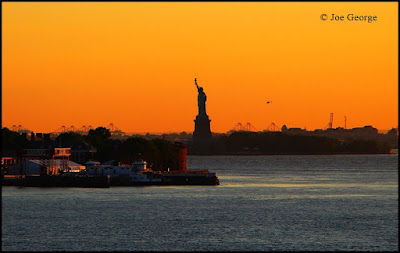 Birthday thoughts, but first this…

More than 90 years ago Joseph George set foot in the great land of America. This was my grandfather. I don't remember him as he passed away when I was very young. He and his much younger bride, Mary (my sitti, or grandmother), could neither read or write (as far as I know). They came to this country after beating the unbelievable odds of escaping the great Lebanese famine during WWI where hundreds of thousands perished at the hands of the Ottoman Empire. My grandparents had nine children, including their eldest son, George, my dad. He spoke Arabic before he spoke English (so I am told), as did his siblings. They didn't learn English until they went to school. My dad, who by some politician's definition would have been considered an “anchor baby,” went on to defend our country in WWII and was deaf in one ear because of it. He also married my mom, Marilyn (nee Enser), and would have four kids, including me. My dad didn't speak Arabic to us kids, as he wanted us to be American. He worked hard, two or three jobs at a time to support his family, and paid his taxes. So here I am, an American. Separated from the “old country” by one generation. So why am I saying this? Maybe I'm getting sentimental in my middle age. But really it's because of the recent events in Paris. It troubles me of the Islamophobia I've seen and heard since then, both blatant and not. Personally, I believe this comes from fear...fear of the unknown. Not all Muslims are Jihadists in the same way that not all Christians are akin to the hate-filled Westboro Baptist Church. The Muslims that I know are peace-filled and family oriented. I remember the altar my grandmother had in her bedroom, which was just off the kitchen, where everyone always gathered. Being a devout Catholic, she had images of Jesus and Mary, and of course a cross. She also had a candle for my Uncle Raymond, who I never met. And later, I'm sure, a candle for my dad, who transitioned at such a young age. Once, when I was a young teenager and came there with my cousin with our two girlfriends—sisters—who had Muslim last names, she brought us all in to see her altar. And it's interesting to think that I was slightly embarrassed at the time—that my grandmother had an altar in her room—as I now find myself with a small altar in my room. Another time, I remember being alone in the kitchen as a young boy, and seeing her on her knees praying, and crying. She of course was speaking in Arabic and I was too shy to ask her what she was saying. I can only imagine what my grandparents went through to assimilate into this country, in the same way immigrants are today. Today was my 54th birthday, and tonight two of my sisters, my son, and I went to Lebanese restaurant for dinner. We struggled with some of the words on the menu, but the flavors of the food were the same. There are so many good people that we sometimes forget this. Not just family and friends but people we work with or those we don't know. The Statue of Liberty was of course given to us by the French, and it is also the first thing many of our ancestors saw when they arrived here. Yesterday President Obama reminded us that France was our oldest ally. A hundred years ago the face of our country changed drastically with the immigrants that arrived here, and today it is doing the same thing. My hope is that we don't build a wall (one literal or a metaphorical one in our hearts) but we open our arms (and hearts and minds) with welcome. There is so much disconnect in the world that now is the time for solidarity, both in our own country and elsewhere. I see so many people posting on Facebook about the evils of religion, and rightly so...there has been so much bad done in the name of religion, but there is also so much good done, too. Religion in itself is not the enemy, nor are people different than us. Darkness may hover for a while, but it in itself cannot make a room dark. One can bring light into a darkened room and make it light, but darkness cannot remove that light. My hope is that we become that light, are that light. All of us. And this is what I was thinking on a seasonably chilly ride home from a restaurant tonight. Peace be upon you. 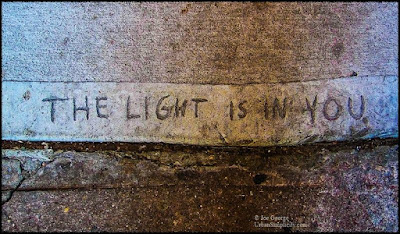