I went to church today, but Jesus was outside. 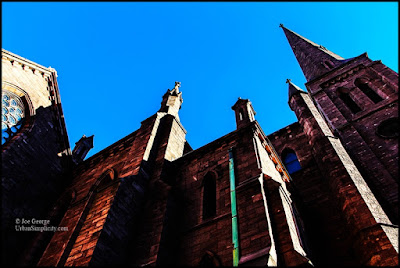 "In spite of everything I still believe that people are really good at heart."~Anne Frank

So first a couple things. The above image is of of St. Paul's Episcopal Cathedral here in Buffalo. It's a beautiful and welcoming space. And below is the life-sized Homeless Jesus statue that lies outside the church facing Main Street. The statue was sculpted by Canadian artist Timothy Schmalz; he also has a Begging Jesus statue outside the Church of St. Francis of Assisi, in NYC. I would walk past it on 31st Street (I think) as I walked to my hotel when I was studying there a couple years ago. What I found interesting about the Begging Jesus statue is that people would leave money in his outstretched hand and no one (that I saw) would take it. The Homeless Jesus statue pictured below is rather controversial (click the above link or google it), and I am really proud that it ended up in my hometown and at St. Paul's. I have to add that I have no affiliation with St. Paul's other than they are nice enough to leave their doors open throughout the day, and maybe once a month or so I stop by in the midst of a busy day for some quiet time in their beautiful sanctuary. And I'd be remiss if I also didn't comment on the fact that it is a rarity that a church's doors are left open other than during formal service/worship time. Thank you St. Paul's; you have, on certain occasions (such as today) been an oasis for me. 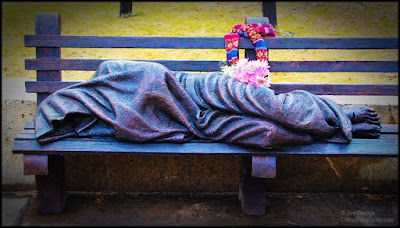 The Homeless Jesus statue arrived in Buffalo last spring, during the month of March I think, and that's around the time the photos above and those directly below were taken. To see the statue in person really is moving; it's life-size and at first glance one may think it is a person lying there. But then you notice the scars on his feet. Right from the very beginning people began leaving things for the homeless...articles of clothing, sundries, food. Some people came to pray. 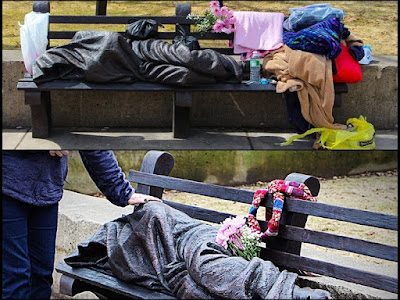 While the above set of photos were taken last spring, the below set were taken today. And now I have to tell you a bit about my day, without getting too personal. But before I do I have to add that I've heard recently that more and more people have been leaving things at the statue for the homeless, and that the church has built a small structure behind it (pictured below) onto which things can be hung. I went there to see that today, but I'm jumping ahead.

Last night I had insomnia. I've been prone to it most of my adult life, but last night was bad. Birds were chirping when I finally nodded off. My alarm was set for 5:30am; I ended up calling in "sick" to work today because of lack of sleep. I fell back to sleep and awoke around 11am. Feeling in a grog I went out for coffee. While sitting there, and feeling somewhat bad for abandoning my co-workers on what I know was a very busy day, I thought of St. Paul's and wondered if it was open as usual (thankfully it was). I simply wanted a place to sit in silence; a holy place.

It was/is an incredibly beautiful day today. And as I approached the church I came upon the scene below. There were two or three women placing things on the statue and offering them to people as well. As I got off my bike I could hear one woman say, "Take what you need; that's why we are leaving it here." Tears welled up in my eyes. I snapped a few photos. And before leaving (to go around to the front of the church at the sanctuary entrance), I approached the women who where now talking to someone else. I gave them my card and asked if I could post pictures on my blog later. I also asked if they were affiliated with any group or organization. The one woman didn't hear me and asked what I had just asked, so I repeated the question. Then she smiled, "No, it's just us." 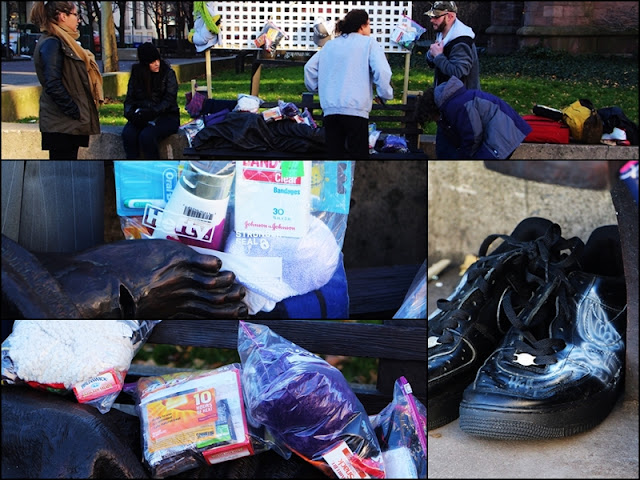 When I went into the sanctuary I was the only one there. It was just what I needed; I sat there for probably a half hour in the chilly stillness. Though I am a Christian it is rare for me to write strictly from a Christian perspective as I feel that the omnipresent consciousness that we call God transcends all religions and is equal to all (and equal to all in non-religions, if that makes any sense).

And as I sat there in the quietness of this beautiful sanctuary in the heart of a city at lunchtime, I couldn't help but stare at the altar and the windows behind the altar. Because just beyond those windows--in the rear of the church and facing downtown--was where the statue of the Homeless Jesus lay. Yes, of course I realize that it is only a statue in the same way a church is only a building. But I also believe that material things can be manifestations of the Spirit. If, for example, that statue were not there people would not be bringing things for the homeless; people would not be standing on a city corner and praying. And yes I also realize that people would be caring for the homeless elsewhere, but because of that statue they were caring for them right there, right now, on this beautiful day just a few weeks before the day we celebrate the birth of the light that shines in the darkness.

As a Christian I would not be telling the truth if I didn't add that I really am not sure what to think about Jesus. Was he truly the Son of Man? The only begotten son of God? I have a difficulty believing that (literalists, please do not send me hate mail). More so, I believe he was one of a handful of enlightened masters (messengers or teachers) that came to help us learn and grow...how to be fully human. And on this day people were following his example, they were outside doing his work. I think we all can learn from the actions of others. And on this day I learned what it meant to offer selfless service--selfless love--to strangers on the street.

I was sitting in a comfortable pew, but Jesus--or at least the spirit from whence he and we all came--was out on the street, working through common souls like you and I. Even in the midst of the confusing world in which we live today, there is still good. So much good. I just have to look for it sometimes.

And this is what I thought as I sat alone in a pew in a really large and ornate but chilly and incredibly silent sanctuary today. 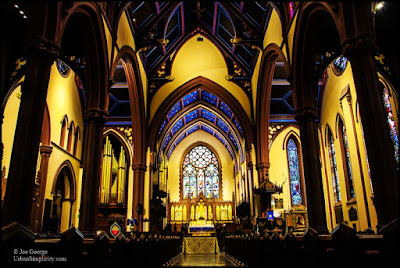