After all this time, it still bothers me... 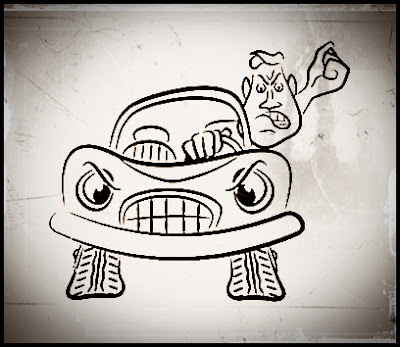 You'd think that after all these years I'd be used to it, that it wouldn't bother me as much. But it still does. You've probably guessed by the above image what I am talking about...getting honked at, beeped at, yelled at, or in the case this evening, screamed at, from a car. But I'm jumping ahead, here's the brief story that prompted this post.

I was on my way home from work this evening, and waiting in traffic at a stoplight. I was against the curb and there was plenty of room between the cars and my bike. The traffic light turned green and cars began moving. Because of the intersection, and it being evening rush hour, traffic moved slowly. So slowly that I was easily able to keep pace with the cars. But I still stayed to the curb, lest someone wanted to pass. Then I hear just behind me...Beeeep! Beeep! Beep! I immediately stopped, put my foot on the curb, and turned to look because it was such an aggressive sounding beep. The car was just behind me and had plenty of room to pass. Initially I could not see his face because when I turned I was greeted with a middle finger stretched out in front of his face and aimed at me. But I could hear him even through closed windows. F.......k yoooou! He yelled (screamed) a couple times before lowering his hand with the said raised middle finger. I just looked at him. Our faces were likely less that ten feet apart. At one point he actually turned his wheels towards me and pumped the gas a little, pretending he was going to hit me. But then he turned his wheels away from me and hit the gas hard. Squealing his tires, and then screeching around the corner, hitting the curb along the way.

I just sat there for a few seconds. Somewhat out of breath, but mostly just flabbergasted. What, I wonder, could I have done to bring so much rage to this guy. I was going with traffic. I had stopped for the traffic light the same as everyone else. There are two rear lights on the bike, and a front headlamp.

On the rest of my ride home this is what I thought about. Firstly, my first reaction to this still brings up an anger in me, but (and here's the big but), it is only brief. In the old days I would have retaliated with angry words. These days I find myself trying to make eye contact with the screamer, to see who they actually are. And the odd thing is, that when my brief anger dissipates and I do see the person face-to-face, I actually begin to feel sorry for them. That this is their reaction to something that they find frustrating, that this is their response.

But I also wonder how this person operates in the rest of their life. Is this the only place they scream like that? Is it because he feels safe (but frustrated) in the car? If, for example, I had done something to upset him and he were not in a car and we were both face-to-face would he scream like that, or even threaten to hit me (the way he did with his car)?

This also makes me question our society. How did it come to pass that this is how a person in a car reacts to a person on a bike. I personally am not a perfect cyclist, but for the most part I follow the rules of the road. And tonight I most definitely was.

The thing is, that none of this solves anything. The angry guy sped away, thinking I'm a nuisance. And to me he just looked like the cartoon above, a sort of caricature of an angry person.

As a full-time cyclist these incidents are bound to occur from time-to-time. Another happened to me just a few weeks ago (click here to read about that one), and I guess that's why I'm writing about this one...because they were so close together, and both drivers were so verbally--and nearly physically--violent.

One would think that by now I would be used to it. But I'm not. It still affects me. And I don't know what the answer is.