But there was a positive outcome... 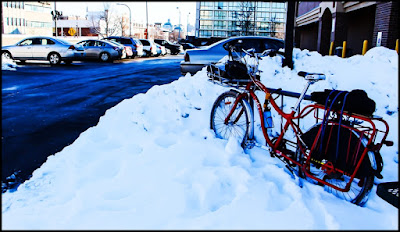 Before I tell this brief story I have to comment on the above photo, which I suppose is actually part of the story. It was my day off work today and I was out and about. It was beautiful and sunny but cold, somewhere around 15F I think. Anyhow, one of the errands I had in mind was to pick up a prescription at a pharmacy. It's part of a large corporate chain which shall remain nameless for the simple reason that I do not want to give them any free publicity (are there any privately owned pharmacies left in Buffalo, I wonder).

Anyhow, I approached through their parking lot which was plowed and dry. The walkway around the store were shoveled so that drivers exiting their cars could easily access the store. But--you probably guessed by now--the bicycle parking was not only not shoveled, one side of it had a small mountain of snow against it, being dumped there from the snow plow I'm assuming.

This, of course, is not unusual. Businesses rarely shovel or plow out bike racks in the winter. There was one point a couple years ago where I actually carried a small shovel on my bike so I could shovel places to park and lock securely.

Anyhow, after retrieving my prescription I needed a few other items and was waiting in line to pay for them. But I couldn't let this go...it really bothered me. So when I paid for my items I asked the cashier if the manager was available (poor kid, he looked a bit scared).

She approached and asked how she could help me. So I asked her straight out, "Am I, as a bicyclist, a less important customer to this store than someone who drives a car?" She looked a little flabbergasted, and simply muttered, "Excuse me?" I tried not to sound angry (which I wasn't, more annoyed and frustrated), but I'm sure I had a "tone." So I repeated the question. She assured me that I was just as valuable of a customer. I then pointed out the stark difference between the parking conditions. She then told me there are limited places to plow the snow. [uncomfortable pause.] "If the cars, which surround this building, can have clean and safe parking conditions it seems to me that there would be a solution to have five-feet of bicycle parking cleared of snow, am I wrong," I questioned? [another uncomfortable pause] "You are correct sir, I'll discuss this with our management team," she replied.

I thanked her and turned and left the store, fully convinced nothing would come of it. I loaded the few things I purchased on the bike, and before I could even unlock it the young man pictured below came jogging out of the store carrying a shovel. He apologized and told me they never even thought about it. And I'm sure this is true with most businesses, but there are some (and I'm not the only one) who ride year-round. He told me he would make sure it's shoveled from now on. He was at first reluctant to be in the photo but then agreed.

I just want to say thank you to Jim (pictured) for not only shoveling the bike rack, but also for agreeing to be in the photo. And also thank you to the store manager for taking such swift action. I apologize if I seemed curt in our conversation.

Bicycles are vehicles and legitimate forms of personal transport. 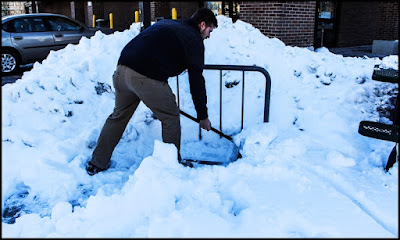 jim said…
They deserve an 'attaboy"for taking positive action and you get one for bringing it to their attention. Good work,Joe.
February 19, 2016 at 9:47 PM