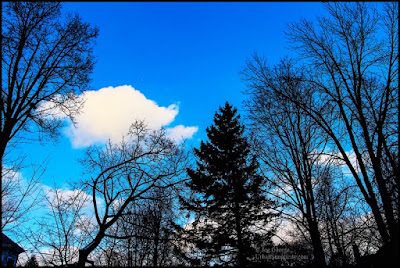 So last week I was nominated to take part in the Facebook Nature Photography Challenge...the idea is that if enough people do it it will flood Facebook with beautiful pictures rather than the negativity that is often posted. I'm not sure if it is reaching it's goal but it is a fun thing to do. Anyhow, the above photo is today's image, day #7 (you can see some of the others at Urban Simplicity on Facebook). The image was initially titled "From the Center," but on my ride home this evening I changed the title to, "The Gift." But I'm jumping ahead as I sometimes do. Here's the backstory.

I worked my second job today and when I do I often pass the labyrinth pictured below. It's behind Unity Church here in Buffalo. I stop and walk it maybe once a month, and I have done so in all seasons. And as I pedaled past it today it looked lovely in the early evening on a crisp 12F day. So I stopped. I was bundled up pretty good so the only thing cold was my big nose. The evening was beautiful. There's something about such cold days that make my senses heightened. I could hear the gravel crunch as I walked slowly through the labyrinth. I was aware of the sound of my own breath, and could feel the coldness of the air as it entered my nostrils and then feel the warmth and see the puffs as I exhaled. And then I arrived at the center and stood there for a minute. In silence. In the city. On this cold evening. And then I looked up and it was beautiful. "There's today's photo," I thought to myself. And I snapped off a few photos. Thus, it was originally titled, "From the Center."

Then, before heading straight home, I stopped at the JCC for a steam and brief swim. In the locker room, as I was dressing to leave, I saw someone who I've chatted with before. He's about my age, I suppose, maybe a few years younger, and he is visually impaired. The first time I met him I knew this because I could see him counting his steps as he made his way to the restroom. Anyhow, as I've said, we've talked before, but tonight we talked in greater length and depth. I asked him about his vision. He told me he was not born this way, that it had only faded in the last ten years, and more quickly recently. And that now he pretty much can no longer see. He also told me of how--as it was fading--he did little "tricks," as he called them, to help him. Like lay 10' lengths of bright white PVC pipe in his lawn so he could follow it when he cut his grass. And lay brightly colored objects against the trees so he wouldn't bump into them. Then he told me he was talking about the yard at his cottage the he and his wife owned, but they are selling because he can no longer do the upkeep. He talked about how much they loved the cottage, and went into some detail describing it. But then he added that he still felt pretty lucky because there are worse problems to have. At that point if he could see clearly he would have saw that there were tears welling in my eyes.

I forget sometimes. What a gift this life is. All of it. I--like so many others, I suppose--take so much for granted. Going through entire days on autopilot. And then I have a conversation like this that wakes me up. Slaps me awake. I'm sure my friend was not aware of the impact our conversation had on me, but it did.

When I came out of the JCC it was dark, and the temperature had dropped even more. The brisk air felt good...bracing. It stung on the bare skin of my face as I pedaled and coasted. There's one section of my route that has a slight decline in the road where I can coast. There were no cars coming in either direction so I closed my eyes for just a second. It was terrifying for so many reasons. Then I did it again, and I counted off the seconds...one-one thousand, two-one thousand. The longest I made it was four seconds. But when I opened my eyes it was as if everything was lit up, alive. Technicolor. At that very moment I myself was fully alive, and was also fully aware of what a gift this life is. All of it.

So this is the reason I changed the title of this simple photograph. And I hope to never forget it. 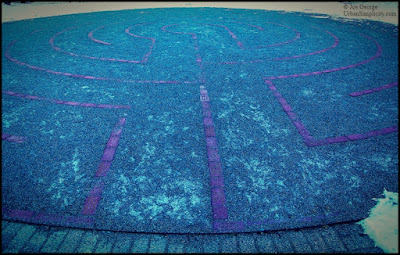