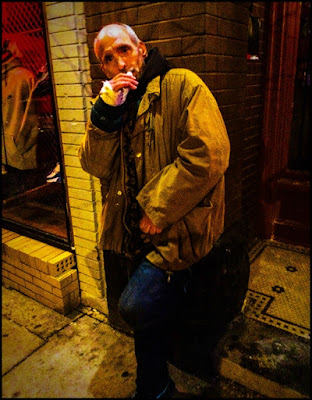 This is Ritchie. I met him last night when I stopped out for a beer. He was leaning on the building as I walked in. As I approached the doorway our eyes met and I thought for sure he was going to ask me for money. I had just gotten out of work and had a mediocre day and my heart was not in a giving mood. I didn't want anything of it. But he never asked me for money. As I passed him I simple gave him the universal Buffalo, NY greeting, "How ya doin?" Surprisingly he responded by telling me his back was killing him and his arm hurt. I told him I hoped he felt better and went inside. While I was in there I saw Ritchie out the front window go across the street to an empty lot. He was having a conversation with someone, but at the same time he was the only person there. As I watched him I could see that he was about my age, maybe a few years older (or maybe not with hard living). And I couldn't help but think that could be me, or anyone of us. These physical bodies that we currently inhabit are so fragile in so many ways, who's to say what problems we may have. Then, when a drunk college-aged person came up and tried to strike up a drunken conversation...you look lonely, are you ok? I tried to explain to her that being alone and lonely are two completely different things, and that while I happened to be alone I was not lonely. She wasn't getting it, and as I was on my last sip of beer, I thought I would have a more interesting conversation with Ritchie, who was standing outside the door again. I asked him how he hurt his hand. "Fighting villains, man," he said with a grin. Did they get away, I asked him. A couple, he told me. He went on to tell me that whenever he fights a villain he gives 95% of himself. Why not 100%, I asked. Because people like Jesus, Mohammad, and Buddha gave 100%, that's why I'm here, he told me. I also asked him how he's been handling the winter, like last week when it was so cold. He didn't like shelters, he said, because they were dirty and unsafe. When it was really cold he went to the hospital. It was near zero out and he was freezing. They tried to kick him out but he told them that he was considering suicide so they would keep him for observation. One can't be stupid and survive while living on the street, I thought to myself. I asked him if I could take a photo of him. He never asked why, but he readily agreed and held up his cast in the photo, seemingly as a badge of honor. And all this while--we had talked for at least 10 minutes--Ritchie still has not asked me for money. So I offered him a couple dollars, which he readily accepted, but as he did he also added (while pulling me close and looking me in the eye), "You see I never asked you for money, I don't ask for people's charity." All I could do is smile. The point of this story is simple. We, I firmly believe, are all children of the same Source. Simple as that. And we all need respect and dignity, no matter our addictions, mental issues, or whatever. Who is to judge the life's path that has led people to where they are. We all need respect. When I began to walk away he stopped me to shake my hand and say thank you. "God bless you, brother," he said. And I bid him the same. Whatever his issues I hope he finds a warm bed and safe on this February evening. To read more in this series, click here.