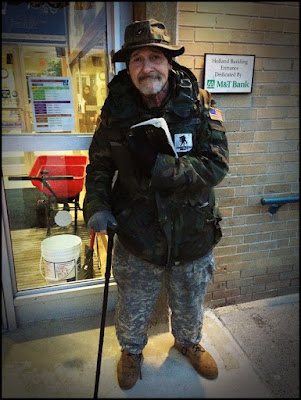 This is Steven. I met him as I was entering the JCC this evening. He was busy selling his story to anyone that walked past him. And most did. I did, too, at first. But then I stopped and walked back to him as I wanted to hear his story. He told me that he was collecting money for the Wounded Warrior Project; he had their badge on his coat. He also said he was collecting money for batteries for wounded veteran's electric wheelchairs. His shtick that he told every passerby (and I mean every) was that they only did this one day a year and today was that day. But today is February 29th, leap day, I reminded him. He just kept saying his story to everyone as they passed. I talked to him for about 5 minutes. No one else stopped that I saw. Was he telling the truth? Who knows. He was a veteran of foreign wars, though. He showed me his tattoos on his arms. He said he served in both Lebanon and Grenada in the early 80's. While I myself am a pacifist, I wholeheartedly support the men and women who serve our country. It's the endless war machine that I am against, not the soldiers. Anyhow, I gave him a couple bucks and asked if I could take his photo. Not surprisingly he said yes, and struck a pose with his King James Bible. I've come to believe that people--all of us--just want to be seen, acknowledged. Before going into the building I shook his hand and thanked him for serving our country. His response, "Peace brother, have a good workout."