Garlic and oil are all you need sometimes… 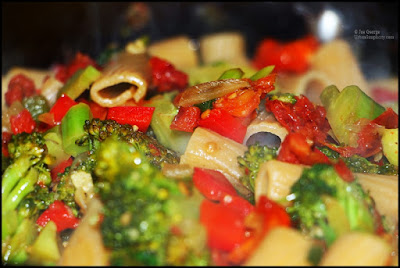 Because this dish, or similar variations of it, is so easy to prepare, I'll begin without ceremony. Peel a few whole cloves of garlic. You can crush them if you like, but it is not necessary. Place them in a small skillet with a bit of olive oil. It's important that the pan and oil be at room temperature, not hot. This goes against everything a chef is taught, but it is essential to this dish. Place the skillet over a low flame and just let it be; let it rest there a few minutes. It will take a few minutes for the garlic to begin to bubble, but that's ok. This is good, actually. If it begins to bubble too quickly the flame is too high and the garlic will cook too quickly. By cooking the garlic low and slow you are drawing out its flavor into the oil; you are also removing much of its harshness. 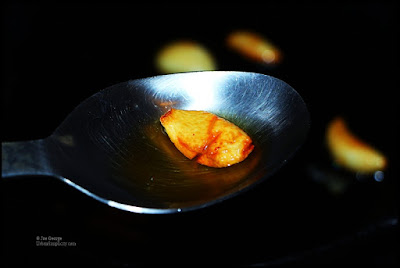 Many of you know that I cook for a living. And I've been fortunate enough to cook in many different venues. My latest gig—for the past year—has been cooking in the prepared foods department of a grocery store. A co-operative and very fancy store, but nonetheless, still a grocery store. And it is busy. Really busy. Everything we cook is in extra large batches. Unlike restaurants and clubs that I've worked, where food is often cooked or served a plate at a time, here it is cooked in large batches, to be later sold. For lack of better words, in my current position I function as a production cook, or as friends and I once referred to, a bull cook. So for this reason, sometimes I have to cook slow, simple, and small. At least for myself I do.

I was surprised, but also glad, that when I mentioned to my son that I was going to make pasta with vegetables for dinner he asked if he could help. So as the garlic slowly cooks, turn and baste it in the olive oil every couple of minutes while you prep whatever vegetables you have. When the garlic is golden brown and very soft, remove it from the pan but reserve the oil. The oil is bursting with flavor. Mince or mash the garlic and set it aside. Transfer the oil to a larger skillet.

Sometimes—often—I forget, or at least take for granted that I am a good cook. I've been doing it so long it is like second nature to me. From my start as a restaurant cook, while a teenager, cooking came easy to me. And this is what I remembered today while showing a young cook at work today how to hold a knife properly as he fumbled with the large sharp tool, and again tonight as I cooked dinner with my son. Cooking is a gift that was given to me at a young age, and one for which I am grateful.

While my son diced an onion I looked in our fridge and wasn't surprised to see the absence of food. In the same way an auto mechanic drives a jalopy, I really do not like to grocery shop. I put it off to the last minute, and I even work in a grocery store. But I did find a half of bell pepper, a couple heads of broccoli, a handful of spinach, and a half-dozen or so of sun-dried tomatoes. So my son and I chopped them together.

Vegetables cooked in this manner—with twice-cooked garlic—are delicious on their own, but when tossed with pasta and cheese they are even better. So before you start to cook the vegetables put a small pot of water on to boil. 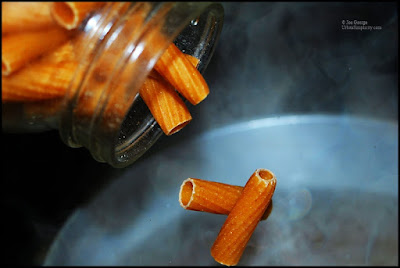 Heat the skillet with the garlic-oil, this time over medium-high heat. If you are using onions and peppers (and why wouldn't you) add them to the skillet when the oil is hot. They should sizzle when they hit the oil. Toss and turn the onions and peppers in the hot oil, then lower the heat to medium and cook them until they are lightly browned. This will bring out their rich natural sweetness. While the onions and peppers cook add some pasta to the pot of water, assuming it has come to a boil. Cook the pasta about 8 minutes, or until it is just under-cooked. Italians refer to this as al dente.

It was nice spending the few minutes it took to prepare this dish with my son. He's a college student in his early twenties and is always busy, and I'm often busy simply because it is in my nature. I sometimes think I have too many interests. Rather than turning on the radio, as I often do when I cook at home, I left it silent, and we cooked and talked.

When the pasta is sufficiently cooked drain it and set it aside. And if the onions and peppers are nicely browned, add whatever other vegetables you may be using to the pot along with the mashed and cooked garlic. I also added a good pinch of crushed hot pepper because I like things a little spicy. Stir everything in the oil, onions and garlic to coat everything in flavor and then add some liquid to the pan. You can keep this vegetarian by adding water or vegetable broth, which I often do, but tonight I wanted the added richness of chicken broth. So I added about a cup of broth to the pan along with a pinch of sea salt.

Adding chicken broth does a couple things. The first is obvious; it helps to cook and steam the vegetables. But it goes beyond that. When the broth reduces it concentrates, which translates into flavor. It also temporarily emulsifies with the olive oil and creates a sort of viscosity to the dish. A richness that would not be possible with water.

So when the vegetables are cooked to your liking, and the broth has reduces enough, add the cooked pasta. Gently fold the pasta into the other ingredients and allow it to cook a little. The pasta will absorb flavors from the rest of the ingredients. Remove the pan from the heat, fold in a little Parmesan or Asiago cheese, reserving some to sprinkle on the top.

My day today wasn't great. Nothing big happened or didn't happen. It was just one of those days. I rode my bike pre-dawn in the rain and it was gloomy most of the day. It was really busy at work. I felt stressed and my feet hurt. But relaxing at home and cooking slow and small with my son with very basic ingredients is really what I needed. And now, as I sit in a cafe a few blocks from my house, drinking a beer and tapping out these words on a keyboard, the sky has cleared and the sun is setting beautifully. And I remember—again—that life is good. Tomorrow is another day, and I get to start over. 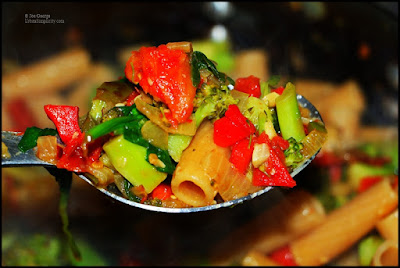