Connected. A Story About a Story. 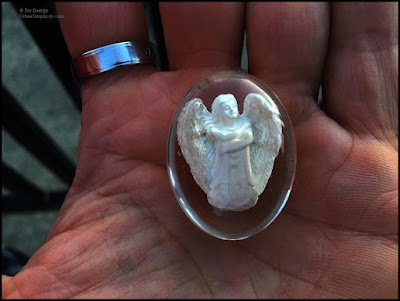 So I went to the waterfront to have a couple beers and take a few photos last night. It was a beautiful night. The day was hot and it had begun to cool off a little. The breeze off the lake was lovely. And it's simply a coincidence that I am writing this post after the previous, but this is something I felt compelled to share. Though I'm jumping ahead, as I sometimes do. Let me begin again. I'll start with the part of the story that is unrelated, or is it?

For the past six months or so, much to my dismay, I've been put on an early morning shift at work. This means my alarm goes off at 4:30am each morning. For me this is early, too early. I am constantly tired and usually run on about five hours sleep; I have not adjusted my sleep time yet. Often—as was the case yesterday—when I get home in the late afternoon or early evening I'll take a nap. This is what I did yesterday. After showering and turning on the fan for both white noise and cooling, I laid on my bed. It was as if someone flipped a switch. I'm pretty sure I was asleep as soon as my head touched the pillow. I slept deep for about an hour; usually I only nap for about 20 rejuvenating minutes.

So what does any of this have to do with anything, you may be asking yourself? A dream I had when I slept is the reason I mention this. The dream is vague to me now but at the time it was one of those dreams that was more real than real. In it I was sitting a large table. And at the table were other people who I do not know now but in the dream they were familiar to me. We were having a conversation and were discussing angels. Someone across from me was telling me—not lecturing, but nonetheless was rather serious—that there are angels and they are in contact with us all the time. The other people looked at him and I as he talked. And I distinctively remember him saying, “You know that we are all connected, to everyone and everything.” We all nodded in agreement.

I awoke with a start. Disorientated and sweating. It was odd for me to wake from such a deep sleep and it be a hot and sunny day out. I felt slightly hungover, though I'd had nothing to drink prior. I sat on the edge of my bed for a few minutes gathering my wits. Processing. Then I sort of disregarded the dream and got up. After dinner I rode to the waterfront just before sun set to capture a few photos.

I often try to arrive just before sunset as it is my favorite time of the day to photograph. And on this evening it was extra special. Buffalo's Main Lighthouse was being lit for the first time in 102 years. Built in 1833 it is our city's oldest standing structure. The lamp was originally fueled by whale fat, but then the lighthouse was decommissioned in 1914 and has sat dark until tonight.

Anyhow, I arrived before sunset. Had a beer and was reading a book by Marcus Borg where he was describing his mystical experiences. I snapped a few pictures; it was still light enough to hand-hold the camera. Then I went and ordered a second beer, before the light changed, and was setting up my tripod. When natural light dips to a certain dimmness a tripod is required for a long enough exposure to manipulate the light. While I was setting up the tripod I did as I often do and set one leg of the tripod between the spindles of the rail so I can get closer to the edge. It was rather crowded because it was such a nice night and there were people on both sides of me at the rail. The light was changing from day to dusk now. And as I started to set the camera on my tripod something caught my eye. The women to my left had dropped something and it bounced and was now on the other side of the rail and beyond her reach; it lay near the ledge of a 10-foot drop into the lake.

I looked at it and couldn't see what it was and then I looked over at her. She was distraught; tears streamed down her face. What is it, I asked her. It's my angel, my sister gave it to me and I've had it since 1974. How will I ever get it, she asked. She wasn't looking at me because she hadn't taken her eyes off her angel.

The rail is probably about 3 feet tall. I could easily stand on a chair and hop the rail to retrieve this, I thought. Then I quickly surveyed the situation. I had already had two pints of beer and was beginning my third, I'm not as young as I once was and hopping back over the rail would be difficult. And as I scanned the edge, which is a sheer drop into the lake, I saw there were no ladders in the wall to climb out should I fall. I actually thought this. In my younger years I wouldn't have hesitated. At any rate, within maybe 4 seconds I realized hopping the rail was not a good choice. So I removed the camera from the tripod, and holding the tripod over the rail, was able to sort of scratch and drag her cherished object back a few inches at a time. It took a couple minutes but the operation was successful. When it was within reach she grabbed it, held it to her heart, kissed it, and then literally jumped with joy. She then showed it to me and gave me a big hug and kiss on the cheek exclaiming how much this meant to her.

I went back to setting up my camera. And while I was doing so the woman's husband approached. He, too, thanked me. It was no big deal, I said, but I'm glad I was able to help. He then asked if he could tell me a story. I said yes. He told me how they had met in San Bernardino when they were both just teens. He was in love with her the moment he laid eyes on her, and he still is after all these years. He apologized as he wiped away tears. But then tears welled in my own eyes as he continued. His wife and her sister had exchanged these little angel medallions in the early 70's, and they promised to always keep them with each other. To remind them of each other. Her sister is now deceased and she often holds the angel while she prays. They grew up near the ocean in Mexico and her sister loved the water. So that's what she was doing..holding the angel while praying to her sister. So this, he said, is why this little angel is so important to her. To her it is her sister. And then he parted.

Wow. I was floored. I still am as I type these words. I had my beer perched on the railing while I took photos. I do this often and have never spilled one. But just after this man and woman parted another younger woman approached with a young man. She leans against the railing and knocked my full beer over onto the pavement. She looks at it, then at me, and simply says, that sucks. And she walked away. Under normal circumstances I would have been upset, but I was still on a sort of high from my conversation with the previous man and women (never did get their names). High on humanity. All I could do is laugh.

So, was my dream some sort of prophetic vision? I don't know. I really don't. But I'm not discounting it. Do I believe in angels? Umm...sort of. Yes, I suppose I do. But not necessarily invisible mystical beings (though I don't rule them out either), but more so angels in the flesh. On this evening I was able to do this very small act of kindness for this person and in turn got to listen to this man's truly moving story. Two grown men were both moved to tears amidst a crowd of people on a hot Saturday night on the shore of one of the great lakes. With all this said there is one thing that I am sure of. And it was reminded to me earlier in the day while I slept in the hot afternoon heat. I was reminded that we are all connected in some indescribable way. Sometimes I forget this, and then sometimes I am reminded. And this is a series of events that happened yesterday afternoon and evening. The below photo is one in a series I shot last evening. Click it for a slightly larger view. 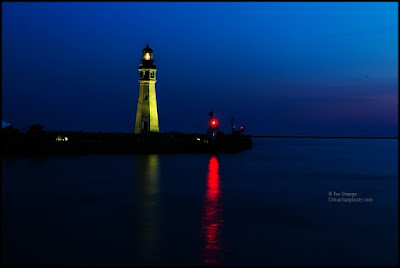