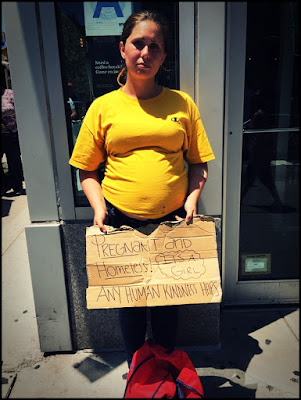 If you've been to this blog on more than one occasion then you probably know a few things about me, and one of them is that I have a soft spot in my heart for the homeless. I don't always give people money (indeed I don't always have it to give) and I don't always stop to talk to them. But sometimes I do give them money and sometimes I do stop to talk.  And in the same way it bothers me when I hear a racist or homophobic remark--painting an entire group of people with a wide and fearful brush--it also disturbs me when I hear a disparaging remark against the homeless. I certainly cannot judge another person because of the predicament they find themselves in. And in fact if I were to suddenly lose a way to make an income it would only be a month or so before I was unable to pay my most basic bills. Anyhow, as I write this I am on a very brief vacation in NYC and here are stories about three people whose lives intersected with mine in the past day.

Last evening, after arriving and checking into my room, I walked to my favorite Thai restaurant on the corner of 15th and 1st. It was hot and the floor-to-ceiling windows were open, so essentially it was as if my table were on the edge of the sidewalk. And as I sat there enjoying a beer and a plate  of spicy noodles I watched a guy across the street. He was interacting with passersby and had two plastic drinking straws still in their wrappers sticking out of his ears. It made me chuckle, but knew it was only a matter of time before he would make it across the street. And when he did he approached and asked for a dollar so he could get a cup of coffee. He had the look of someone who spends time on the street, and he still had the straws sticking out of his ears. My first response was that I didn't have a dollar. And as the waitress brought my second beer he looked at me and said, aww com' on man. I'm getting better at asking people if I can take their photos, so I told him I will give him a dollar but I'd like to take his photo. And as I pulled the camera out he turned and began to walk away. Forget it man, I don't want my picture taken, he muttered. Why would I want to do that anyway, he asked. I like to take pictures, I told him, and the straws in his ears made me laugh (he still had them there).  Alright here's a dollar, I won't take your photo. Thanks for making me laugh, I added. He turned around and I handed him two dollars. He looks at it, and says, I only asked for a dollar, here's some change, and he puts two quarters on the table. I told him to keep it but he wouldn't. He walked back across the street to where I initially saw him, and when he did he handed one of the dollars to another guy who was sitting there in a wheelchair.

Then this morning I was on the subway when a guy comes on the train carrying what was probably everything he owned. The train wasn't crowded but it was full. He stood near the door and asked people if they could spare some money, that he had none and really needed some. His voice was soft and he never looked anyone in the eye. From a distance I could tell from his pungent odor that he hadn't showered in a while. No one looked at him and no one gave him money. He sank down to a seat and put his head in his hands. I might have given him some change had he made his way through the car down to where I was seated but he didn't. He just hung his head and looked ashamed. As is often the case on a NYC subway, when the doors open it is a mad and discombobulated dash of people coming and going every which way. And as fate would have it my path crossed this man's path and as I saw him coming I reached in my pocket and found some change. He wasn't looking at me so I said, here you go man, and held out my hand with the change in it. Looking surprised, he held out his hand and accepted it. And when he did there were tears in his eyes. Thank you was all he said.

And then, lastly, this is a story from this afternoon. I had gone to the 911 memorial site and then stopped at a Starbucks for a reprieve from the afternoon heat. And after sitting I came out of the door and Nicole was standing next to the door. I know her name because I stopped to talk to her and ask her name. When I saw her and her sign I couldn't not stop. Hi I said. Hi she said back. I don't mean to be so forward, but do you mind me asking how you find yourself standing out here on this hot day. I don't mind, she said. And then she told me her story, while she cried. Her mom passed away last year and her dad was abusive so she left. She stayed in a shelter for a while, but it was there that she was raped and that is why she is pregnant. She does get some help but it's not enough, that's why she's asking for some. She wouldn't say where she was staying other that someone form a church was helping her. She was now afraid of shelters for obvious reasons. She was trying to get a job, but it's difficult to do that when you're homeless and impossible when you are pregnant also. I asked her if I could take her photo, and would it be ok if I told her story on my blog. She agreed on both accounts. And after wiping her tears for the photo she thanked me for telling her story.

So are these stories true? Yes, the ones I just told are. Are the stories I've heard from street people true (the ones I've just told and others at home, too)? Probably, but maybe not always. I can be gullible sometimes. Sometimes--when I'm in Buffalo--if people ask me for money to get something to eat I'll offer to buy them food. Sometimes they refuse, which is a sign I am being scammed. So I don't always know if these stories are true or not. But I do know this. When I spoke to Nicole today in the hot sun while she had a baby in her belly. She looked me in the eyes when we spoke. And when she did there were tears streaming from hers, which in turn made them well in mine. And that to me is truth enough. I gave her my card with this blog's address on it so she could see where I would post this story. She told me she had Internet access at the library. So Nicole, if you are reading this I do hope you and your unborn child find the help you need. I pray you are healthy and safe. And thank you for helping me remember what is real and true. Peace.

We are going to see and hear a lot more of these stories in the future. It is still early days here in North America.

We find ourselves in a period that I call "Early Dystopia" and humankind is surely reaping what it has sown.