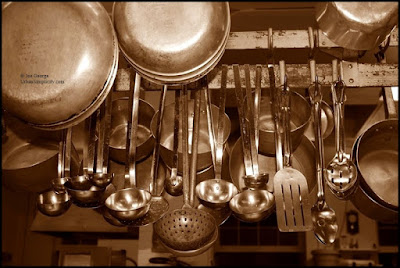 So I just came across the below story which I first wrote in '89 or '90. It's sort of memory lane for me. And I find it interesting in that pushing thirty years on, while I write differently now to a degree, my voice is still present in this early work. Even the recipe shows where I was at the time (literally and figuratively)...I had just returned from being in Europe for my first time and then spending time in New Orleans, where I worked as cook at Restaurant de la Tour Eiffel. What's special about it (to me) is that it is the first story I ever wrote with the intention of publication. I was taking a writing class at the time. It was later published in Artvoice. I ended up writing for Artvoice for more than 15 years. That jump-started a side job as a food writer at the time where I was published in weeklies across the country. Anyhow, the story was written while I was sitting in the kitchen office of the Park Lane Restaurant, where I was chef for a very brief period. The photos are more recent and taken during my fourteen year tenure as chef at the 20th Century Club. 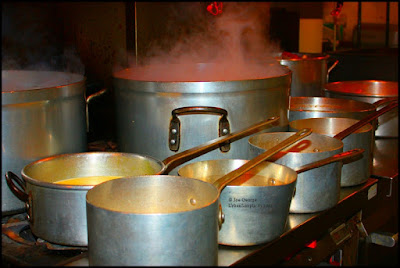 Sitting in my office before dawn I look out through faded glass to see the half lit restaurant kitchen and wonder how many chefs and cooks have sat here in this old and battered chair. Pieces of their past remain--old notes, books, tools and hand written menus dated New Years Eve 1974.

The kitchen staff has not yet arrived, except for one early dishwasher, who diligently empties last nights trash. The heat has not yet begun.

Looking out the office window, at the far end of the kitchen, I can see the stairway and the loading dock. The stairs lead down to the basement, under the entire building, or up to the secret passage behind the banquet rooms. Chaos often happens in this passageway, without the guests' knowledge, just inches from a formal party.

Directly opposite the office and to the left, next to the stairway, is the old ice machine. As usual it is making its all too familiar rattle and constant dripping sound. It is this sound that always gave me the urge to turn off water faucets when I was first employed here. Past the ice machine and to the left is where the main kitchen begins, this is where most of the food preparation is done.

It's kind of odd, but when I look out the office in this early morning light, the kitchen looks tranquil--almost as if it were at peace with itself. When the restaurant is open and banquets are in progress, it looks as though the whole building were wrestling with itself and the kitchen were its core; like a heart, pumping life into the building.

Walking through the kitchen I see the massive steam kettle, sitting lifeless and cold. As I light the ovens, and the row of cast steel flattops that sit upon them, I hear the usual whoomph sound. This sound, a ball of igniting gas, can be a little unnerving at times. Now that they are all lit you can here the crackling sound they make from the steel heating and expanding. It's kind of like the sound your car engine makes after it's been shut off and begins to cool.

I walk to the dish machine area at the far end of the kitchen and greet Francisco. Even through the loud chattering hum of the dish machine, and the steam that seemingly pours from everywhere, his cheery "buenos dias amigo" is reassuring.

As I go out into the still dark dining room, to get a cup of coffee, the air conditioning hits me and feels cool and fresh. I look around and try to picture the room festive and full of people.

Back in the kitchen I turn on the rest of the lights which gives it a fake fluorescent glow. The walls that at one time were white are now yellowed and the stoves are black from years of constant heat. No longer are the flattops crackling, but are now hot and radiating--the heat can actually be smelled.

Walking back to the office I stop and turn to look at the kitchen in my full view. It is now lit and all of the equipment is  running. I notice the beads of perspiration, that never fully disappear this time of year, on the red-brown tiles of the floor. The other end of the kitchen is a surreal scene of steam rising from the entire dish machine area and Francisco moving amidst it all. The heat has now begun.

I unlock and open the door to the loading dock to allow some cool morning air in. The air rushes in but, being in the hallway, doesn't quite make it through the kitchen. It is broad daylight now, almost 7:00 am.; the rest of the staff should be arriving soon.

I settle back into the old creaking chair in my office to have my morning coffee. As I begin to write the days menu, and the first gulp of coffee goes down, a phrase a Frenchman said to say to me a few years back comes to mind, "le cuisine est votre maison" ("the kitchen is your home").

In a bowl combine the flour, baking powder and water; stir until it forms a smooth paste. Stir in the garlic, bell pepper, green onion, Tabasco, salt and crawfish tails. Cover the bowl with plastic wrap and refrigerate for 1/2 hour.

Heat approximately 1 inch of vegetable oil, in a deep cast iron pan, to 325 degrees Fahrenheit. Drop the beignet batter, a spoonful at a time, into the preheated oil. Fry approximately 4 minutes on each side or until golden brown and cooked through.

Drain on absorbent paper and serve with lemon wedges and tartar sauce.