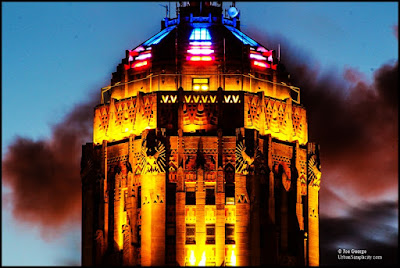 So this is the tippy top of our incredibly beautiful city hall. It's lit up red, white, and blue tonight in remembrance of 9/11. I had been to the waterfront this evening taking photos and was on my way home when this stopped me in my tracks. Like many Americans (and probably non-Americans alike) I've been thinking a lot about 9/11 today...and how it changed things. It was our loss of innocence in many ways. Everyone has their stories about where they were when they first heard about it. But my most personal story came the day after, when details of the people who perished began to be announced. One of the planes carried children. Half a classroom is what I remember them saying. I can't remember if they were on their way to Washington or New York (with parents, teachers, and chaperones) but at the time they were the same age as my son, who is now in his twenties. I was at home and when I heard this news I remember literally crumbling to the ground. I also remember yelling--cursing--at God. How could you let this happen?! I yelled. What kind of God are you? And then as days and weeks passed I heard of the heroic actions that not only professionals did but also everyday citizens. Some of them lost their own lives trying to save others. As this was the conversation of nearly everyone for so long, I also remember hearing a conversation in the steam room at the local JCC where I steam and swim. Two older gentlemen were talking about this terrible event and one finally blurted out--almost wailed--"Where is God, where is He during this?" After a really long pause--an uncomfortably long pause--the other person said, almost whispered, "God is in the response. God is in the response to all of this. We can either choose hatred or we can choose love. And I want to choose love," this man continued. "I want to help any way I can, even if it is simply sitting in a steam room and discussing this." I personally was not at this horrific event, nor did I lose someone close to me in it. But I mourn them. They were part of us and we part of them. We can either choose hatred or we can choose love. And today I choose love. Our country--if not the world--is broken. And we need to fix it. If we want to survive as a species, it's the only way. Seriously. We don't need to "like" everyone, but we do need to love them as fellow citizens on this rock we call earth. It really is the only way. Love. And this is what I was thinking about as I waited for the long-exposure shutter to click tonight as I stood in traffic on a chilly late summer's evening.