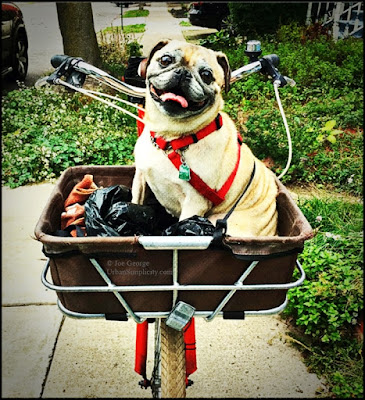 So this is Maxwell, one of the pugs that owns me. He's 8 and a year older than his brother, Franklin. You wouldn't know it by this photo, but Maxwell is the serious bossy one. He hadn't been on a bike ride since he was a little puppy. In this photo I had to taken him to a groomer (St Francis grooming and training). It was a semi-emergency in that poor Maxwell had an ingrown dew claw that was becoming infected. The entire procedure took about 20 seconds. Now look at how happy Maxwell looks :)

(On a side note: he tried to jump out of the basket the entire two mile ride to and from the groomer; I held the handlebars with one hand and Maxwell with the other.)