This is Michael (and me, too). 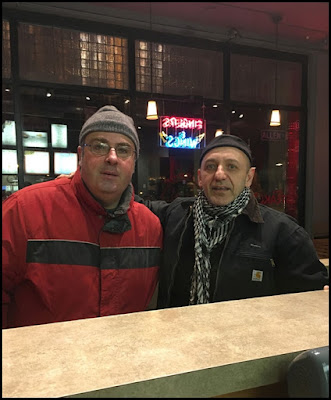 Okay, first let me say that it is rare that I post photos of myself. Like many people I really do not like it. But anyhow, that aside, let me tell you about this photo. I had gone out for a couple beers this evening at my favorite watering hole, and when I came out Micheal was standing there. He timidly asked me for money while he looked away. I gave him a dollar and asked him his deal...how he found himself out here on a cold New Years Day eve asking for money.

He has mental illness, he told me, has had it all his life (schizophrenia, but he's on medication) . And because of it is unable to work. He has not received his disability check and was hungry. He was trying to get enough money to buy a sandwich. He sleeps at a friend's house who charges him ten dollars a night, which he paid for the night, so now he had nothing left to eat with.

I asked him if he would like me to buy him a sandwich and he looked surprised but said yes. Now you may be saying to yourself, okay here is Joe getting duped again. But I don't think so. Micheal was sober, if not timid. And I ask you, can you imagine standing outside a bar asking for money for food? What would that take?

So it's New Years Day evening and one of my resolutions for 2017 is to live authentically, intentionally, and with conviction. I am usually (always) worried about money. But I also always seem to have it. And yes, to the people reading this thinking, "Why doesn't he just get a damn job," I understand. I have worked hard--really hard--my entire life, since I've been 16. But I don't think it's that easy. I don't have mental illness (at least I don't think I do). I have never been reduced to asking for money on the street on a cold January night. And even though I worry about money all the time I had some in my pocket when Micheal approached me. So if I truly want to live to my convictions, to be the person that I say I am, how could I possibly not buy this guy a sandwich? He is a human and I am a human. I have more than I need and he doesn't.

I left Micheal at the restaurant to eat his sandwich and he thanked me and said Merry Christmas. That's all I have to say.