I am not a perfect cyclist by any means, but... 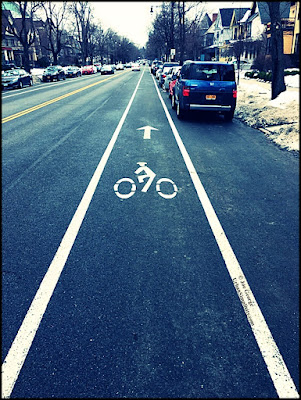 For those who know me, or even have simply been to this blog in the past, likely know a few things about me, and one of them is that I don't own a car and choose bicycling as my primary choice of personal transport (the other two are walking and public transportation). This said, I am not an anti-car person, it's just that about 5 years ago I realized that not only I no longer needed one but that it was cumbersome to have one in my life.

I'd also like to add that I am in no way a perfect cyclist. For the most part I follow the rules of the, but still, I am not perfect (but who is).

Anyhow, thus said, I had gone out for coffee this morning to do some reading and writing at Sweetness7 and before heading home stopped at Westside Stories and purchased a book on the life of Bonhoeffer. So, in short, I was sort of caffeined up and blissed out as I pedaled and coasted. I was keeping pace with traffic as it had slowed because a driver next to me was making a left turn into a driveway. It was then that I noticed the car behind us turn into the bike lane behind me to pass the car on the right. Did he not see me? He sped ahead, narrowly missing me. He was so close I could feel the air move between us as he passed, the side-view mirror nearly clipped my handlebar. I yelled out--partially in anger and partially in fear--and he looked over at me with a quizzical look as he passed. I slammed on my brakes and stopped. A passerby who was walking saw it and inquired, "Whoa, dude, are you ok?"

Again, I am not a perfect cyclist, but today I was on a clearly marked bike lane when a car crossed into it to pass. Please (other cyclists) do not comment on this in a hateful anti-car way (as tempting as it might be), and pro-car people, please do not comment in the other direction. All I ask is that people in cars be aware. While my bike is heavy by bicycling standards (about 55lbs), your car weighs a ton-and-a-half. To the person in the car whom which I refer, you are likely not reading this, but if you are, know that your actions today almost changed both of our lives.