The Eggplant and the Angry Tomato (Sauce). 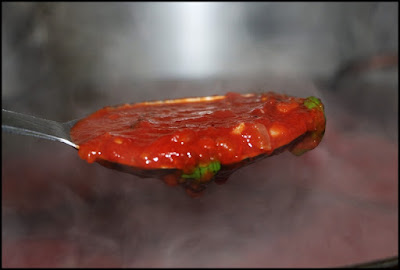 This past summer I ate at an Italian restaurant here in Buffalo and had a pasta dish with arrabbiata sauce. Oddly--for someone who cooks for a living and who really enjoys Mediterranean food--I had not heard of this sauce. I asked the server about it and they simply said it was a "spicy tomato sauce." Hmm...I thought. Nonetheless, it was delicious. But I also thought $17 was a bit pricey for a plate of pasta and tomato sauce.

Anyhow, this past weekend I was in Toronto with family and we ate at an Italian restaurant. I saw the same dish on the menu so decided to order it. Again, it was delicious, but also pricey @ $21.

I decided to look into it further to recreate it for myself. It turns out that the word, arribbiata, is Italian for "angry," making reference to the spiciness of the sauce. And the server that waited on me last summer was correct, it is simply a spicy tomato sauce.

Arribbiata sauce, it seems, is part of a trilogy of spicy Itlian tomato sauces. It is also the simplest. They all contain hot peppers, but of the other two, Fra Diavolo (Brother Devil) also contains anchovy, red wine, and usually shellfish, while putanesca (whore sauce) contains anchovy, olives, and capers. Arribbiata sauce, though, simply contains crushed red pepper...it could be, in a way, the base sauce for the others.

This said, in the recipe I included below I added red wine, which is an option and also makes it closer to a Fra Diavolo sauce. I also added a bit of sugar, simply because I like it, but this is also an option. While the sauce simmered and pasta cooked I also diced and sauteed an eggplant, to which I then added some of the sauce, simply to make a heartier dinner. The recipe below represents just the sauce.

In conclusion, this is about as simple a sauce as you can get but it is packed with flavor. It can be made in a half-hour or less and can be used for a base for others. Add meat or seafood or other vegetables if you like. If you'd like a recipe for Fra Diavolo, with historical info, read this earlier post. 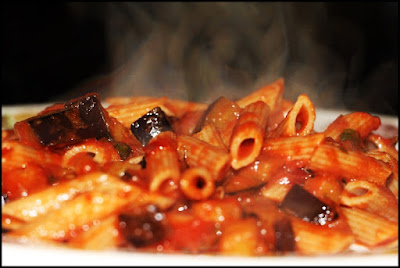 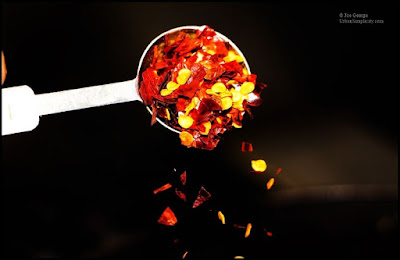 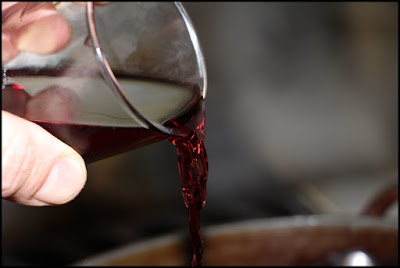 Stir in the red wine and water, bring to a boil, then lower to a simmer. Cook the liquids for a couple minutes, then stir in the tomatoes, and salt. Simmer the sauce for about 10 minutes, then add the chopped basil and simmer another 10 minutes or so. 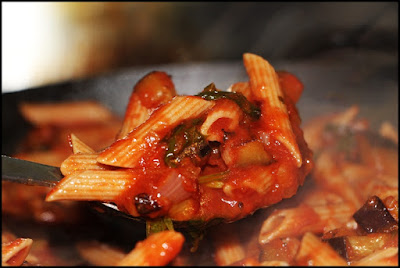