This is Jay (and he was a bit of a challenge) 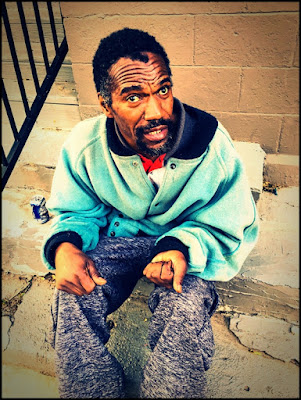 This is Jay. I met him on my way home this evening. But before I tell his story, or what I know of it, I have to tell you mine. At least mine from this evening.

Earlier this evening I was on a phone call with a professor for a class I am currently taking. During our conversation I told him how I feel we are all equal. All of us. No exceptions.

On a side note, if you've been to this blog before then you know that I sometimes profile people on the street.

Anyhow, I had stopped out for a couple beers and was on my way home when I heard him. He was across the street sitting on a stoop. I couldn't see him because from my view he was hidden behind parked cars. But I could hear him, almost wailing. He was asking for help to get something to eat. So I walked over to him.

When I first approached he immediately asked me for money. For what I asked? I am really hungry, he replied. He was going to the store down the street for a sandwich, some chips, and--he added--a beer if he had enough money. [Note the beer sitting next to him.] I thought about taking him to the store to buy a sandwich for him, but I was tired (life, sometimes, can be so exhausting).

I asked him his story, he was somewhat guarded, but this is what he told me. He was released from prison very recently, July of 2016, after 23 years. That's a year ago, I thought, but after 23 years that's pretty recent. I didn't ask him what he was in for because I really was afraid to know. But he told me that when he "was in" he was beaten so badly he now has memory problems and seizures. This, I suppose, also explains his halting way of speaking.

Anyhow--and this is a true story--when I reached into my pocket for change I pulled out not just change but also a small pocket rosary that I had purchased last summer at St. Paul's Chapel next to Ground Zero in NYC. I sometimes carry it with me when I travel. I don't remember putting it in my pocket today, but there it was. What, is this a test, I thought to myself? I had intended on just giving Jay a couple quarters but gave him what I had in my pocket, which was nearly two dollars.

Jay was challenging, there is no question. The way he spoke. His assertiveness. But he is still a human on planet earth, and one who has some problems (as we all do). Yes, he had a beer sitting next to him and was hoping to get enough money for another, but I had just come from a tavern where I had three. None of us would hope to end up on the street, but some of us do, and that doesn't necessarily make them a bad person. So now, as I get ready to sign off on blogger and log onto Netflix to watch a half-hour of something mindless before crawling into bed, I hope and pray that Jay also has someplace to sleep on this unseasonably chilly spring evening.